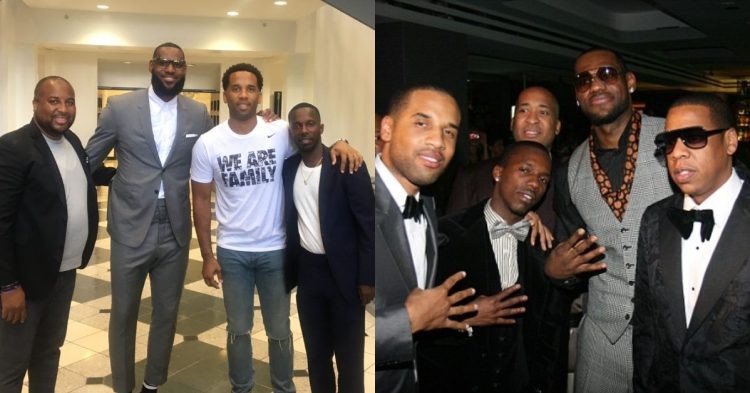 Michael Jordan and LeBron James are the only 2 NBA former/current players that have achieved the official status of ‘Billionaire’. They are also the greatest players in NBA history, so it makes the most sense as to why they are so affluent. LeBron James has been able to build an empire a lot quicker than MJ did and you could credit at least half of it to Maverick Carter, Randy Mims, and Rich Paul.

LBJ has played in the NBA for almost 2 decades. Throughout that run, you could argue that he’s been the best player in the NBA in at least 15 of those seasons. He’s won it all, from ROTY to MVP and Scoring titles to NBA championships. However, once he realized the weightage his name carried, he used it like nothing else. And today, he is more influential than half the teams in the NBA combined.

King James is not a real king but he does have an empire. He’s won an NBA title with every city he’s played in. Even if he was in a small market he was not losing out on any money. And that’s due to the modern reach that players have with the new age media.

Mac Carter has engineered many of Bron’s deals over the years. And continues to create multiple businesses with LeBron.

Randy Mims is today a member of the Lakers “Front Office” or management. pic.twitter.com/k9PLf7lNvi

However, the biggest deals that LeBron earns were hand-delivered to him by his 3 musketeers. Maverick Carter, Randy Mims, and Rich Paul are those three important men.

Randy Mims and LeBron James are childhood best friends that were born together in Akron. Mims was attempting to get into the marketing scene but his best friend wanted him along on his journey to greatness. LeBron offered Mims the job of his personal assistant and manager. However, with time, James’ influence helped him get other jobs, like his current one in the Los Angeles Lakers front office.

“By the way, every teammate I’ve ever had loves Randy more than they loved me.”

Rand Mims is one hard person to find any information on. Even though he’s been the ‘smallest name’ out of the big-3, his lovable personality has gotten LeBron to places he could’ve never imagined.

The next name on that list is Maverick Carter. A name you’ve definitely heard a lot associated with LeBron James and his success. These two were also friends from a very young age but Carter got James’ one of his best endorsement opportunities of all time. Beats by Dr. Dre is the best headphone brand in the world. And James was one of the first ‘celebrities’ to endorse the brand.

Before Team USA made their way to Beijing for the 2008 Olympics, Carter managed to get his hands on 15 unreleased headphones. Carter told LeBron to give every player on that team one of those headphones. That basically got Beats so much promotion without having to spend on each player on that team. Their stocks rose and Dr. Dre was definitely smiling.

Maverick Carter has also played a huge role in other profitable investments that LeBron has made. One of which was footballing giants Liverpool’ before their rise back to the top. They’ve gotten into the cinematic scene together and are using the stage of Hollywood to its extreme extent.

These 2 have been with LeBron since the beginning and may have not seen as much struggle as the 3rd man on the list. Rich Paul is a survivor. He would do whatever it takes to make ends meet. At one point, he was selling NBA jerseys in a parking lot from the trunk of his car. Due to early family problems, he did not have a path to success.

But with hard work comes luck. And Rich Paul once managed to sell a ‘Magic Johnson’ jersey and a heart-to-heart conversation with LeBron James. James was impressed with Rich Paul and saw the potential in his struggles. He wanted someone on his ‘team’ that would fight for the badge. And Rich Paul fit that perfectly.

Paul is currently the super agent of the NBA and has some of the biggest stars under him. He created Klutch Sports and is the boyfriend of singing pop star Adele. He’s gotten LeBron all the max contracts and also been the guy that got him the stars he needed to win.

Everyone is afraid of Rich Paul if you had to come up against him. And that’s what has made him so successful and a ‘menace’ to the world of professional sports.

“A 20-year friendship, a business relationship, and a brotherhood. It’s just fate.”

LeBron James became Billionare much faster than Michael Jordan did. Even though Jordan’s signature brand eclipses any venture LeBron has taken, the total damage tips in favor of the King. What this group of individuals might do next will always be a question mark. But we do know one of the things on their agenda, buying an NBA team as soon as they can.

Will the success they’ve had for LeBron’s career be able to translate in the NBA with a team. Rich Paul does have all the contacts, Mims has the front office experience and Maverick knows how to bring in off-court money. This has helped them never step on each others toes and create the most powerful group in the business scene of the NBA.