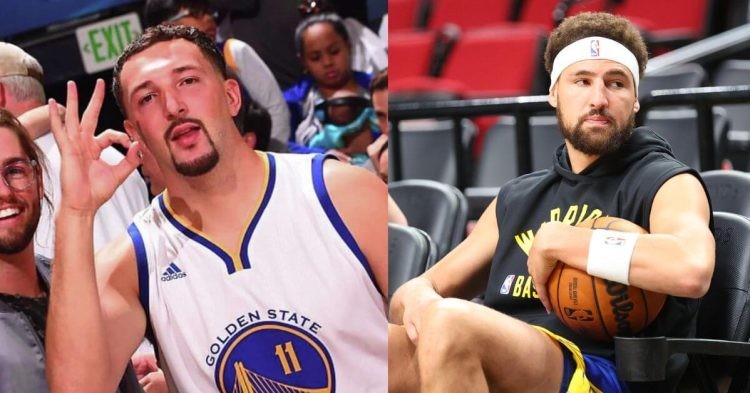 Dawson Gurley has made NBA news recently for masquerading as a Fake Klay Thompson in Warriors Games. He has received a lifelong ban from entering the Chase center, the new home of the Golden State Warriors. One must wonder why he received such harsh punishment for his actions.

It is important to recall that this is not his first attempt at pulling off this stunt. However, considering that it is most likely his last, we can look back at who he is and when this all began.

Gurley was born in Kansas and is 29 years old. He began his career as a Youtuber, primarily known for his prank channel “Big Daws TV”. Additionally, he was a crazy Golden State Warriors fan, primarily of Klay Thompson. He admired the NBA star to such an extent that he got the exact same type of haircut and makeover. This made him look all the more identical.

Dawson Gurley might be the biggest Klay Thompson fan

There are reports stating that he has been doing this with the Warriors for the last 8 years. He has even filmed himself pretending to be Klay while being seated next to NBA players. He has posted all of his activities on his YouTube channel which already has a base built on pranks and comedy.

It is important for the viewers of the game, not to pay much attention to people like this. These are usually nobodies, who simply engage in these types of behavior just to draw attention to themselves. Perhaps, for their “15 minutes of fame ” or just the feeling of having the world’s eyes on them.

Was it worth it to lose 10K on tickets and be banned for life? Absolutely. I was an NBA player for 10 minutes bro 😂😂

This is made all the more true by the fact that Gurley generated a lot of social media presence and attention through his tweets, as he was getting banned from watching Warriors home games for the rest of his life. It is indeed sad that this is the consequence of desperate acts to seek attention.

Fake Klay banned from Chase? This is NOT justice.
“Y’all should be celebrating Fake Klay” – @JalenRose

One could argue that it is also the product of being a “modern-day” prankster. In that world, almost anything is considered funny. Maybe the Fake Klay Thompson was trying to generate some laughs from the NBA players or audience for his “effort“. Nonetheless, he will have to visit the GSW away games if he ever wants to watch his favorite team live again.