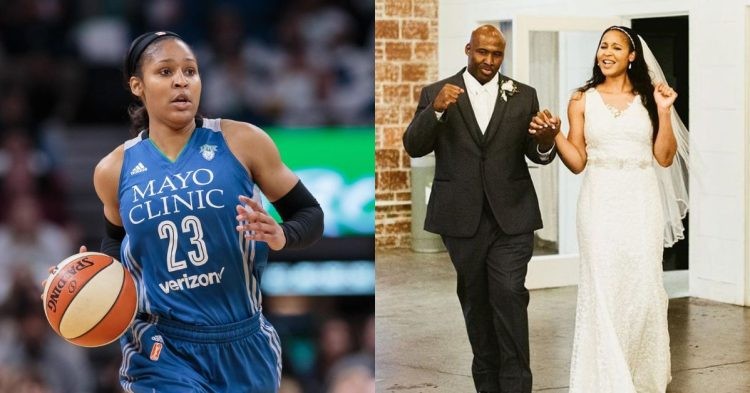 After 12 years in the league, WNBA Star Maya Moore has officially announced her retirement from the WNBA. Drafted #1 overall in the 2011 WNBA Draft by the Minnesota Lynx, she helped lead the team to four WNBA championships and appeared in the finals six times during her eight-season WNBA career.

But Moore stepped away from the basketball court after the 2018 WNBA season in her prime, to help a longtime family friend and now husband Jonathan Irons get a 50-year prison sentence overturned, which they were able to do in 2020. After that, Moore and Irons got married and also had a son, Jonathan Jr., last year.

When Moore first encountered Irons, he was ten years into a 50-year jail term that had been imposed on him for the nonfatal shooting of a homeowner in the St. Louis region. She was a high school student taking part in a youth ministry program at the time. Moore came to the conclusion that Irons, who was detained in 1997 at the age of 16 after being apprehended, was a victim of prosecutorial error.

After his attorneys argued that there was no evidence supporting the homeowner’s testimony that Irons broke into his home and committed the assault, a judge reversed his conviction in March 2020 and he was then released from prison.

“I feel like I can live life now,” Irons said after taking his first steps out of the prison. “I’m free, I’m blessed, I just want to live my life worthy of God’s help and influence.” He added: “I thank everybody who supported me — Maya and her family.”

The fight to liberate him had lasted for years, and Moore’s choice to forgo playing in the WNBA at the height of her popularity was partly influenced by it. The couple welcomed their baby boy into the world in February 2022. When Moore stepped away from basketball in 2018, she started a social action campaign, Win With Justice. Moore and her husband also have a book coming out this week titled Love & Justice.

Maya Moore WNBA achievements: Did she win the WNBA title?

Maya Moore has officially announced her retirement from the #WNBA

Thank you for everything you have done for the league and the game of basketball as a whole 🧡 pic.twitter.com/2Kf7OGpRzn

Not just in the WNBA, Maya also helped her national team, Team USA, win gold medals in the 2012 and 2016 Olympics. She also had a lot of success overseas, as the relative season timings of the WNBA and other top leagues allowed players to compete throughout the year.

She won the Spanish Domestic League once with the club Ros Casares Valencia, and completed a three-peat in the Chinese League with the Shanxi Flame, including beating the Brittney Griner-led Beijing 3-1 in the 2014-15 finals.

Then in 2018, she returned to the EuroLeague with the Russian basketball club UMMC Ekaterinburg and won the EuroLeague Championship. Moore’s college career was arguably even more impressive than her stint in the pros. She was a two-time Naismith Player of the Year and had a 150-4 record in four seasons with the Huskies, winning two national titles and making four Final Four trips.

But with her retirement now, she is officially moving on from this part of her life to spend time with and focus more on her family. “I walked away four seasons ago, but I wanted to officially retire,” Moore, 33, said in an appearance on Good Morning America with her husband Irons. “This is such a sweet time for us and our family. The work we’ve done, I want to continue that in this next chapter.”

It’s official! So thankful to so many🙏🏽 pic.twitter.com/h9tACx3SKm

While Moore’s WNBA career might have come to an end, her social activism will not, as stated by her multiple times. “I want to continue to be present at home,” she said, “for my community, for my family, our little baby, for Jonathan — but also doing work with Win with Justice, our nonprofit, to continue to raise awareness about prosecutorial reform and how we can have safer and healthier communities.”

Moore was a rare, generational talent that entered the league and accomplished a whole lot, but her work off the court is also what continues to inspire many around the world.