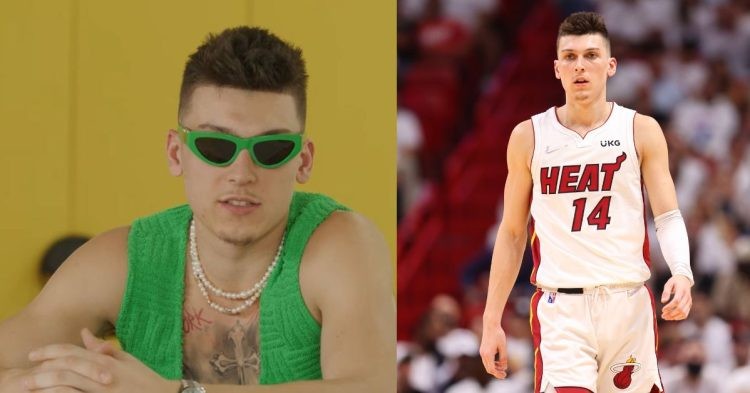 Pre-game rituals are important to almost every sports athlete nowadays. It doesn’t matter how ridiculous the superstitions sound, but if they work, they work. Even the biggest players have the things they make sure to do every game. One great example would be LeBron James‘ chalk toss before every game. He has been doing that throughout his career with the Cleveland Cavaliers, Miami Heat, and now the LA Lakers.

Another NBA athlete to reveal his constant pre-game activity would be Heat‘s, Tyler Herro. On a new episode of BS W/ Jake Paul, Herro answered a question about what he makes sure to do before every game.

He said, “I eat the same meal, breakfast, and lunch. Just pancakes for breakfast, another traditional breakfast meal. And then the same thing for lunch or I just eat like pasta or something. Every game I take a nap, like before the game, at some point.”

This hasn’t been the only time he has spoken about his pre-game ritual. In 2018, he answered a question about the same on Twitter. He answered, “I eat Noodles before every game.” If we look at it, Tyler’s pre-game ritual mainly revolves around food. It seems like he depends on the meals he eats to bring him all the luck he can get.

I eat Noodles before every game. https://t.co/i2L4tmEtaU

That’s not all, there is another pre-game routine for the 22-year-old that fans have spotted. On multiple occasions, cameras have captured Herro warming up in a specific way. In one warmup session before the game against the Chicago Bulls, we can see him starting off with 3-pointers. After that, he proceeds to practice his ball handling. This has been the case many times.

Tyler has been exceptional for the team during his NBA career. In the 2019 NBA Draft, the Miami Heat acquired him at the 13th pick. Since then, he has featured 215 times for them in the NBA, including playoffs. Herro has averaged 16.2 points, 4.6 rebounds, and 3.2 assists per game.

His electrifying performances have prompted fans to have high expectations for the youngster. Although that may increase the pressure, he is a player who has the potential to reach the greatest heights.