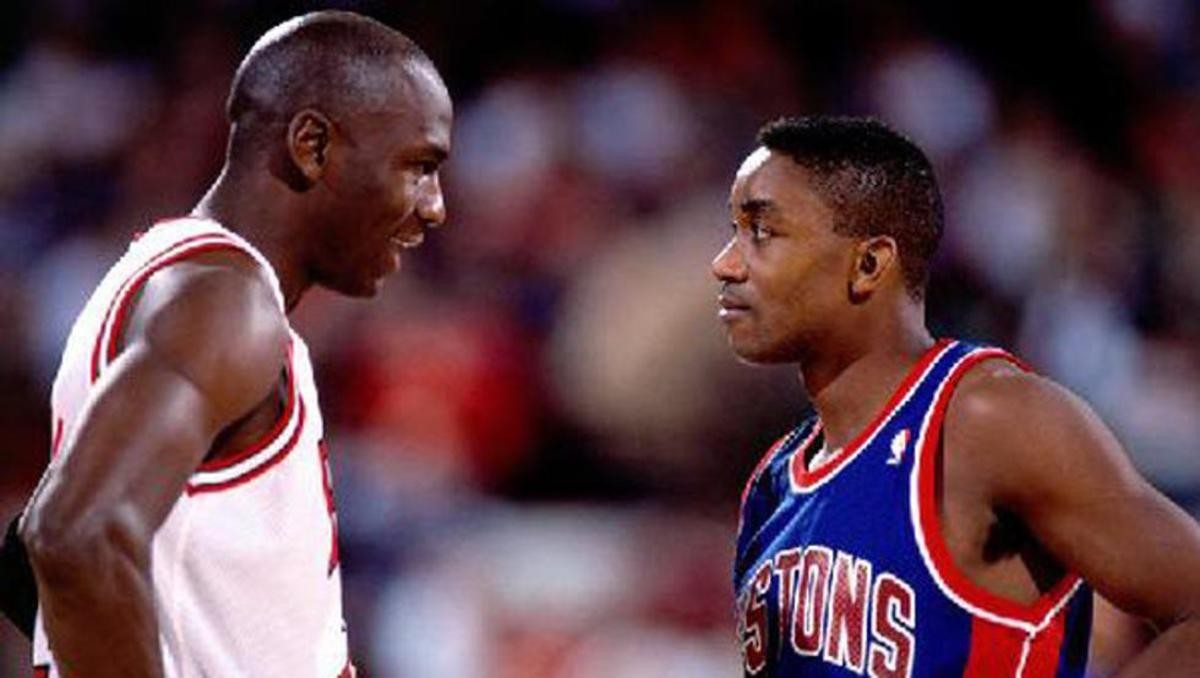 Michael Jordan or more famously known by his initials, MJ was one of the greatest basketball players in the NBA. In his fifteen-year career as a player, he won six NBA championships, five MVP awards and fourteen NBA All-Star selections. In a career filled with awards and honours, Michael Jordan also had many rivalries. One of the most prominent beef was the one between Michael Jordan and Isiah Thomas.

The Rivalry Between Michael Jordan And Isiah Thomas

The Last Dance is a documentary about Michael Jordan’s life with the Chicago Bulls. The documentary covers one of the greatest rivalries between the Chicago Bulls and the Detroit Pistons. More specifically a rivalry rose between MJ and Isiah. During the time period of 1988-1990, The Pistons went up against the Bulls thrice. In 1988 they faced off in the Eastern Conference semi-finals. The Pistons wrecked the Bulls 4-1.

However, in the next season, the face-off started going the Bulls way but Isiah and co had other plans and took back the lead. The 1990’s playoffs saw Michael Jordan and the Bulls finally dominate the Pistons. The Pistons may have dominated the Bulls but when it came to the matchup between Jordan and Isiah the story is different. Michael Jordan averaged 32.6 points, 6.6 rebounds and 5.9 assists.

The rivalry between the two stars began in the 1985 All-Star game. Jordan was chosen as a rookie for the Eastern Conference. According to sources, Isiah who was in his fourth year did not like the attention the rookie was getting. So he allegedly organized to freeze out Jordan and keep the ball away from his hands.

Jordan had a below-average game that night with only nine attempts. However, Isiah claims that this never happened. Jordan got revenge when the Bulls went up against the Pistons. Michael was an absolute beast on the court and put up 49 points with 15 rebounds and 5 assists.

Also Read: How Many Times has Dwayne Wade Changed Teams in His NBA Career?

Isiah Thomas brought up the rivalry again. When the Last Dance was released, basketball fans were excited to get a glimpse of the GOAT’s journey. But with all the good that came in the documentary, there was a lot of bad. The documentary spoke about how Jordan had the upper hand against Isiah and the Pistons especially between the 1985-1990 seasons.

Ever since the release, Isiah Thomas has not kept quiet. The former NBA star stood up for himself and too to social media to say that he has no hate for Jordan but the stats are good enough proof to say who actually won the rivalry.

Let it be known no #hate just #facts https://t.co/H424UZkkgu

Thomas also went on to say that even though the Bulls may have achieved more than the Pistons, head to head he dominated Jordan.

Isiah Thomas says he was “dominant” head to head vs. Michael Jordan;

“Head to head, I was dominant over him (Michael Jordan)…Until 1991 when I basically had career-ending wrist surgery, my record against him and his team, it really wasn’t competition there.”

Michael Jordan has not made any public comments about the slander made against him by Isiah. It is clear that Thomas has an agenda of proving Jordan wrong even though he claims there is no hate.