"You Ain't Doing What You Are Supposed To Do": Charles Barkley Calls Out Anthony Davis for Lack of Dominance 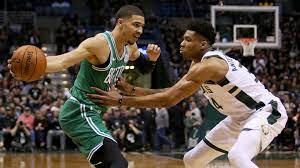 Milwaukee played most of the season without their complete healthy roster. Khris Middleton and Jrue Holiday missed 6 games each – on different fixtures. Centers Brook Lopez and Bobby Portis were involved in 1 match & 7 matches respectively.

But Giannis Antetokounmpo – 2-time MVP and reigning finals MVP powered them through difficult situations kept them in playoff contention. Giannis doing work for The Bucks at both ends of the floor, leading in points, assists, steals, and rebounds

Boston Celtics have been a very successful franchise in NBA with 17 titles. But lately, people have written them off including the current season. Even though Eastern Conference is more competitive this season, Boston has maintained their record just to qualify for playoffs.

Dynamic duo Jaylen Brown and Jason Tatum have been among the top scorers for Celtics – scoring 25.6 and 23.5 points respectively. Veteran Al Horford is leading in rebounds (8.9) and Dennis Schroder is their assist leader (5.8) in his 1st Celtic Season.

A big double-double performance last night from our @gatorade Player of the Game 🔥 pic.twitter.com/i2ek88fjWl

Milwaukee Bucks are slowly picking up the pace to cement their position for playoffs. This could be a worrying sign for other Eastern Conference competitors. Offensively Bucks have scored an average of 108.1 points this season – 9 points less than last season’s average. Also, the scoring margin for the bucks has dipped to a mere +.2 this season from +5.7 the previous season. But in the last 3 games, they have improved to a +4.7 scoring margin.

Celtics have always been a very compact and disciplined team. They lost with very narrow margins this season. Boston Celtics have maintained their scoring average to 108.4 – slightly below the previous season. The average scoring margin is similar to the Bucks. Defensively also both teams are equal allowing nearly 108 points per game.

Both teams have a similar record, similar stats, and surprisingly some key players will also be missing in this match. But Bucks seems to be on roll, healthier Jrue Holiday is added advantage to them. Milwaukee Bucks shall be able to extend their winning run at expense of the Boston Celtics.

How to watch Milwaukee Bucks vs Boston Celtics?

TD Garden will host the match between the Bucks and the Celtics. The stadium is prepared to accept fans in full capacity. Local TV Channels broadcasting match will be Bally Sports Wisconsin for the Bucks. NBC Sports Boston will telecast live for the Celtics. International viewers can access the game on NBA League Pass.

Also Read:  Here’s Why Ben Simmons Return May Not Be Desirable for Philadelphia 76ers