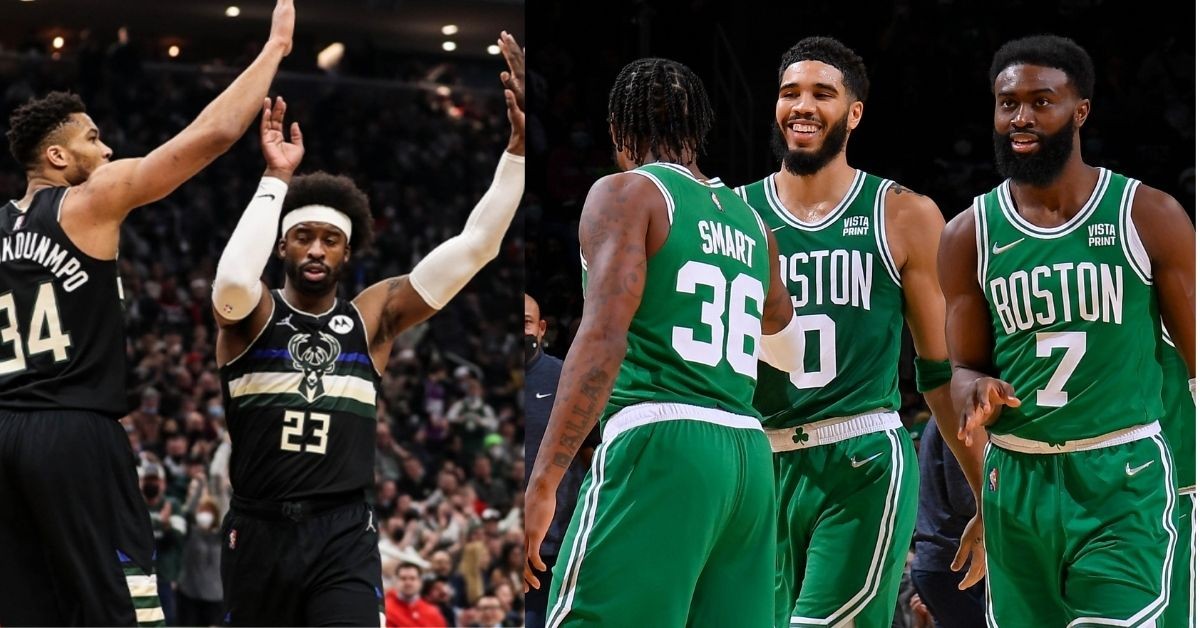 Giannis and squad vs Tatum and squad (Credit-Twitter)

Giannis Antetokounmpo and the Milwaukee Bucks defeated the Chicago Bulls in 5 games in the NBA Playoffs. They now move onto the second round, where they will face the Boston Celtics. Jayson Tatum and Jaylen Brown carried the Boston Celtics to a 4-0 sweep of the Brooklyn Nets in the first round. The Celtics improved dramatically this season and hope to knock out the defending champion Milwaukee Bucks.

Giannis Antetokounmpo has lost his best offensive teammate in Khris Middleton. It is unclear if Middleton will return for this series. Therefore, the Bucks-Celtics series proves to be evenly matched this time.

The Celtics and Bucks have been matched up several times in previous postseasons. They were matched up in 1974, 1983, 1984, 1986, and 1987, The Milwaukee Bucks managed to win only in the 1983 postseason, where they swept the Celtics. However, the Celtics won every other encounter.

The Bucks and Celtics also matched up in 2018 and 2019. The Celtics won in 2018 due to a deeper roster and better young potential. However, the Bucks crushed them in 2019 as Giannis had taken his game to another level. The Celtics have always been in contention and recently made the Eastern Conference Finals in 2020. However, they were defeated by Jimmy Butler and the Miami Heat. Coincidentally, this was the same team that eliminated the Milwaukee Bucks that year.

If the Milwaukee Bucks had Khris Middleton for this series, they would mostly be considered the favorites to win. However, they will be made to rely on other role players to support Giannis in this series. The Celtics played excellent defense on Kevin Durant in the first round. However, this defense is going to be put to the test by The Greek Freak and the Milwaukee Bucks. They are another team that is extremely defense-oriented.

Both the Boston Celtics and Milwaukee Bucks have a significant challenge ahead in this series. The young Celtics stars must attempt to knock out the defending title champions and Finals MVP in the Milwaukee Bucks and the Greek Freak. The Bucks, on the other hand, must find a way to get through this series without one of their best offensive scorers and playmakers.

However, there is a slight advantage to the Celtics. They ended this season on a rampage and finished 2nd in the Eastern Conference. Therefore, they will have home-court advantage for games 1 and 2 as well as potential games 5 and 7

The Celtics are ready for the next challenge ???? pic.twitter.com/iAUrEwgR8H