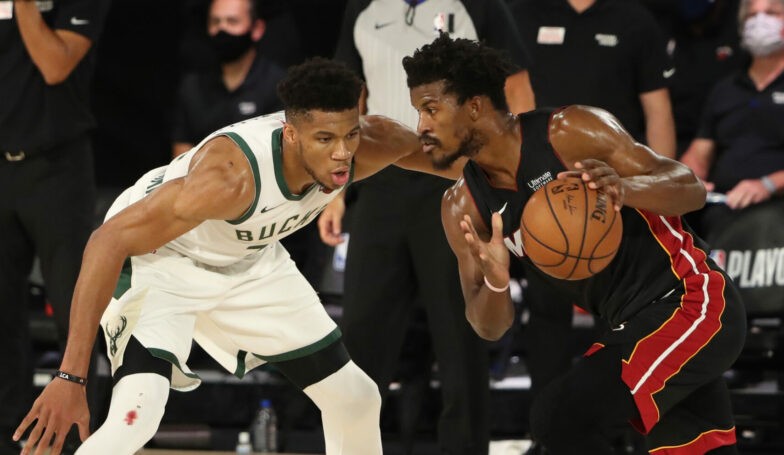 The defending champions Milwaukee Bucks face Miami Heat in the latter’s first game of the season. Bucks hit the road after a blowout victory over title favourites Brooklyn Nets at home. Whereas, the Miami Heat made several big changes over the summer to become a title contender once again this season.

Jimmy Butler acknowledged the issues that Heat faced last season which led to an early exit from the playoffs. He strongly believes that their team is built for the championship this year with the addition of Kyle Lowry, PJ Tucker, and Victor Oladipo.

"I gotta test my limits and see how far I can go." pic.twitter.com/aaXDNjdaIH

Miami Heat began the 2021-22 NBA season with a near-perfect record in the preseason. On the other hand, Milwaukee Bucks are the reigning champions and clearly ready to defend their title.

Although it was only the first game of the season, by defeating Brooklyn Nets Milwaukee established dominance early on in the season. Many believed Bucks took advantage of James Harden’s injury to advance in the playoffs last season. But they quashed those arguments on the opening night.

Kyle Lowry could prove to be a great replacement for Goran Dragic. With scorers like Duncan Robinson, Tyler Herro and Jimmy Butler, Lowry can concentrate on playmaking. Tyler Herro seems to have bounced back from whatever happened to him last season. Heat chose him over James Harden and soon he needs to prove why.

turn that sound all the way up and get hyped with our intro pic.twitter.com/5STnUp5i7C

Milwaukee Bucks have a long injury list but that did not stop them from defeating a healthy Nets roster Tuesday night. Jrue Holiday is listed as probable and his presence will make all the difference. Both teams play with a strong defensive mindset and Holiday’s absence can be detrimental to the Bucks.

Bucks have the advantage of chemistry built over the years as opposed to the Miami Heat with all the roster changes this summer. The defending champions, Milwaukee Bucks are expected to defeat Miami Heat tonight f Jrue Holiday is not sidelined.

How to watch Bucks vs Heat?

Milwaukee Bucks vs Miami Heat will take place in FTX Arena, Miami and the stadium is prepared to accept fans in full capacity. The game will not be televised nationally but Miami residents can watch it on BSSUN and regional viewers from Milwaukee can catch the game live on BSWI. International viewers can access the game on NBA League Pass.