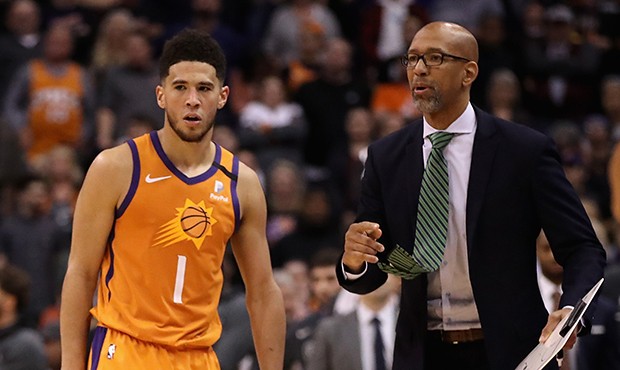 Giannis put up 41 points with 13 rebounds and 6 assists. He had an FG% of 60.o in the 38 minutes he played. Giannis also managed to improve his free throw shooting as he converted 13 of the 17 shots he took from the line. Coach Monty Williams however was not happy at the end of the game with how Giannis was offered so many freebies.

Monty Williams Is Upset About Giannis Getting 17 Free-throws

Monty Williams defence strategy against the Bucks was simple. It was evident that he wanted to send Giannis to the free-throw line as much as possible. Giannis has had a below-average performance at the line this postseason. However, in game 3 of the NBA finals, Giannis made sure that he made most of the attempts. Deandre Ayton drew his 5th personal foul early in the fourth quarter. People might claim that the calls against Ayton were 50/50.

The Suns’ Coach, Monty Williams said that he did not want to complain about the fouls but it was unfair that Giannis got 17 free throws while the whole Suns team has only 16.

Also Read: Underdog of the NBA Finals Game 3: Jae Crowder and Bobby Portis of the Phoenix Suns and Milwaukee Bucks

Suns coach Monty Williams: “I’m not going to get into publicly complaining about fouls … but we had 16 free throws tonight. One guy [on the Bucks] had 17”

The Suns have based their game around the mid-range. Their stellar backcourt has always been known for taking the mid-range jumpers and three-pointers. It is a rare case where a Suns offensive star comes forward to the paint. However, it’s not the same for the Bucks backcourt. The Milwaukee Bucks play in the paint. Their offensive plays mostly finish in the paint.

The Phoenix Suns will have to re-group and come back stronger. It sure does look like Giannis is not going to stop till he brings Home the championship. The Suns have a lot more to worry about than the number of free-throws  Giannis is getting.