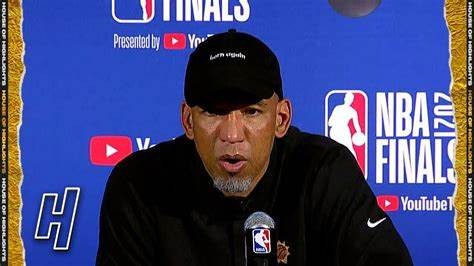 Monty Williams is the head coach for the Phoenix Suns. He was a former player in the NBA and played from 1994 to 2003 for five franchises. Monty Williams started his stint as a coach in New Orleans for the Pelicans and was also the vice president of basketball operations for the San Antonio Spurs. His run with the Phoenix Suns as a head coach this season was incredible. The the Suns had a 2-0 lead in the series. But Giannis Anteteokounmpo spoiled the party for the Suns and were crowned NBA Champions 2021. Head coach Williams stole hearts with his wonderful display of sportsmanship.

Monty Williams has all the reasons in the world to be disappointed.  The Phoenix Suns had blown a 2-0 lead and had lost a series after being in the driving seat. Monty Williams lifted his head and did something that fans will respect for years to come. He went into the Milwaukee Bucks locker room and took time to congratulate the opponent team. Coach Williams told the Bucks that they deserved it and the playoff run was a wonderful experience. He thanked the Bucks for making him feel like a better coach.

I just wanted to come and congratulate you guys as a man and a coach, You guys deserved it. I’m thankful for the experience. You guys made me a better coach and made us a better team

Coach Williams also spoke in a pot match press conference. he expressed his hurt and disappointment. The loss is something that will remain in his heart and mind till he gets his redemption.

Hopefully next season, Coach Williams and the Phoenix Suns will come back stronger and seal the deal. Until then the Suns will re-group and work on everything that went wrong for them in the NBA Finals series against the Bucks.