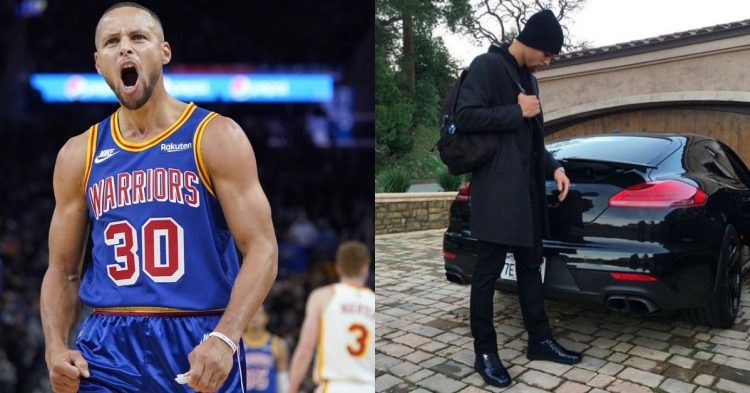 There is no doubt that Stephen Curry is in the top 3 of the best players in the world right now. This year, we all know that he helped the Golden State Warriors win another title in style. He also bagged a Finals MVP trophy as well. The 2021-22 season marks one of Steph’s most successful seasons.

Steph focuses on his game mainly through his shooting and off-the-ball movement. In addition to that, his passing and vision are also quite underrated among fans. Just like how he balls out on the court, he does the same off it as well.

He boasts a luxurious car collection worth millions. Obviously, with the help of his lucrative contracts with the Warriors and other sponsorship deals. Let’s have a look at the most luxurious cars that Steph owns.

At No.5, Curry owns a Cadillac Escalade ESV. The price of the car is around $75,000. As we all know, the Escalades are known to be the monsters in the SUV section. Apart from that, the car can also reach a speed of 60 mph in under 4.4 seconds.

Steph has a beautiful family, including his wife, Ayesha, and three children. The Escalade also acts as a family car with the space it has. If that wasn’t enough, it also offers high performance and comfort at the same time.

The fourth most expensive and luxurious car that Curry owns would be the Tesla Model X 90D which is around $120,000. Like, the Model X is also an SUV that can reach high speeds effortlessly.

It seems like the Chef uses the eco-friendly electric car to travel with his family. A couple of years ago, he took a picture with his daughter Riley and wife Ayesha in his Tesla with a black interior.

In Steph’s car collection, there is also a Mercedes Benz G-Wagon. He bought the car a couple of years ago. Although the exact number is unknown, we expect the price of the car to be around $110,000 to $120,000.

It seems like the American customized the luxurious car a few years ago. The front bumper does not have a grill in the standard edition. Together with the front grill of the car, Steph also changed the rims according to his style.

Here comes the best part. At no.2 and 1, Steph boasts two Porsche cars. We all know they can be extremely fast, but they also come at a cost. Curry’s second most expensive car is Porsche Panamera Turbo S. The price of the car is estimated to be more than $180,000. The car can reach a top speed of 196 mph and can do 0-60 in just 2.9 seconds.

That’s not all, Steph’s most luxurious car will be the Porsche 911 GT3 RS which is worth $200,000. Just like his other Porsche, the 911 can reach a top speed of 197 mph. The car has a 4.0L flat-six engine and the horsepower that it provides is 520 hp. Although many NBA stars have much more lavish cars, it seems like Stephen Curry prefers to keep it simple. His car choices are quite interesting and unexpected.