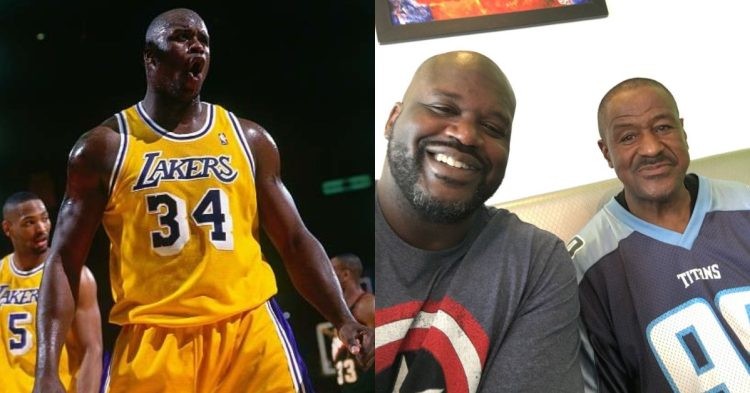 Shaquille O’Neal is one of the greatest NBA players and he has become a great father as well. He currently has six children. Although his marriages may have been unsuccessful, Shaq has done a great job of raising his kids in the best way. The former LA Lakers star has certain rules for his children, both in their dating lives and careers.

You may think how Shaquille manages to be a great dad, the answer lies in his childhood. Shaq’s biological father, Joseph Toney, faced a lot of trouble during the player’s childhood. He was once sentenced to 6 years in prison, before leaving his son and wife, Lucille O’Neal. Phillip Harrison was the one to take up the father role in Shaq’s life to raise him.

However, Shaq did meet his biological father after Harrison’s death. He revealed the details about the reunion between him and his father recently.

In an interview with Anas Bukhash, Shaquille was asked to summarize Toney in one word. Shaq said, “Thank you, for bringing me into the world. We communicate every now and then. It’s just that I’m 50 now, so I don’t need a father.”

He also spoke about how was reunited with his father. “There’s this restaurant, I’ve been going there for years. Every time I go in there, one chef would look at me and just start crying. He wouldn’t say anything, just start crying. One day my mother called me, after my father passed away, and said, ‘You should connect with your biological father.'”

When Shaq asked his uncle who was a cop to help him find his father, he was told that Toney lived in the same building that Shaquille had been going to for years. When he went to that building, he confronted the chef who was always crying.

“‘I asked, ‘why you always crying?’ ‘Man, I’m Joe’s best friend. And hopefully one day he’d come by and y’all can eat and that’d make my day.”

When he contacted Joseph Toney to have a conversation with him and get to know him, Toney apologized. However, Shaq mentioned that his father does not have to apologize and that they should focus on getting to know each other better.

Shaquille concluded by mentioning that he got to know Toney because of his mother. He said, “We’re good, it’s because my mother, she wanted that to happen. But I don’t hold grudges, I don’t have time. Because there’s this life and then there’s real life. I don’t have time to think about all of this stuff. Children, mother, businesses.”

When Shaquille listed out his priorities and why he doesn’t have the time, he mentioned his children first. That shows how he has learned from the personal experiences he has gone through in his life and why he should always put his children first before anything else. He was not lucky enough to receive a father’s love during his childhood and Shaq knows that is the biggest priority when it comes to his children.