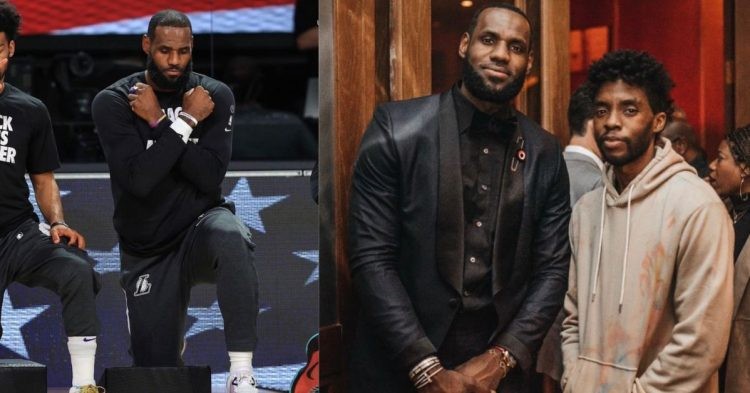 LeBron James has always been a supporter of black celebrities. He is one of the celebrities who has had an impact on improving the lives of black people in America mainly. One of those instances where he supports a fellow brother would be when he paid tribute to Marvel superhero Chadwick Boseman. The late actor was an inspiration to many players in the NBA.

The Lakers star tweeted, “WOW!!!!!! FOREVER”, with the infinity emoji together with the Wakandan salute and brown heart.

Boseman passed away in 2020 at age 43, after a four-year-long fight with colon cancer. He always kept the news private and focused on his career. Marvel first introduced Boseman in Captain America: Civil War. Since then, his impact on the film industry has become long-lasting, and fans still celebrate the star.

Just like in the movies, Boseman was a King in real life as well. Many NBA players mourned after his demise and many even paid tribute to him. LeBron was one of them. When all the players took the knee in honor of the Black Lives Matter movement, LeBron did the iconic Wakanda Forever salute. It is the move that Boseman does in the Marvel movies, where he plays an African superhero.

Lakers’ LeBron James w/ tribute to Chadwick Boseman: “It actually felt like we had our black superhero and nobody could touch us. To lose that, it’s sad in our community. To lose Black Panther & Black Mamba in the same year — 2020 is the sh**tiest year.” pic.twitter.com/GiGbPA80Gp

When asked about the tribute, LeBron said, “It actually felt like we had our black superhero and nobody could touch us. To lose that, it’s sad in our community.”

What was Chadwick Boseman’s impact on the NBA?

The Hollywood star’s last public appearance was at the 2020 NBA All-Star game. He was sitting courtside to watch Team LeBron take the win over Team Giannis.

That’s not the only team Boseman has had an encounter with the NBA. The late star even featured in an NBA Celebrity game in 2015. Other notable stars to participate were actors Abhishek Bachchan and Kevin Hart.

Adding on, the most memorable moment that Boseman had with the NBA would be the dunk contest. At the 2018 NBA All-Star Dunk Contest, Victor Oladipo did something that caught the attention of every fan. Boseman passed a Black Panther mask to the then Indiana Pacers star before the pair did the Wakanda Forever salute.

The 2018 NBA Dunk Contest featured a little help from the Black Panther.

Chadwick Boseman was an inspiration even to NBA players.pic.twitter.com/G4qvkmxpNq

Although the dunk wasn’t that impressive, the action earned thousands of claps from the audience in the arena. It shows how inspiring Boseman was to other black personalities in the NBA, and how deserves every bit of recognition he gets.