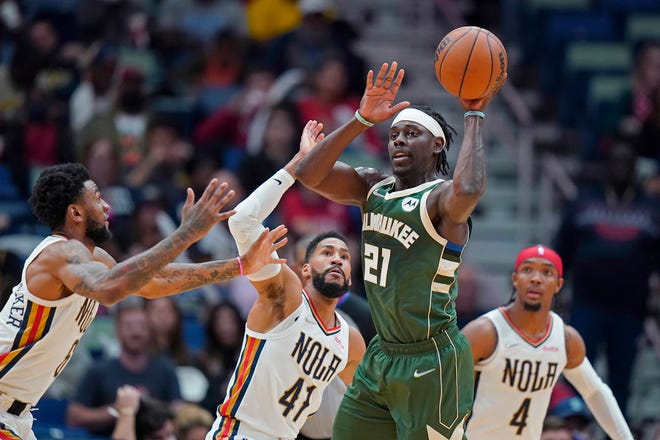 The New Orleans Pelicans travel to the Fiserv Forum for a road matchup with the Milwaukee Bucks on New Year’s Day. Both teams go head to head for the second time in the 2021-22 NBA season as the Pelicans took a 116-112 victory in December 2021.

The Pelicans with a record of 13-22 had a rough start to the year, but are playing their best basketball of the season winning five of their last six. New Orleans in the last ten games has a record of 6-4 while averaging 109.8 points, 48.7 rebounds, 25.9 assists, 6.9 steals and 4.5 blocks per game while shooting 45.7% from the field. Their opponents have averaged 108.7 points.

RT to vote @B_Ingram13 into the All-Star game! #NBAAllStar pic.twitter.com/O6kdOrAiPh

Brandon Ingram leads the Pelicans in scoring and assists with 22.9 points and 4.9 assists while shooting 45.3% from the field and 34.9% from the deep. Jonas Valanciunas is also having a great season as he averaging 18.5 points and 12 rebounds for the Pelicans. Devontae Graham is averaging 3.6 made 3-pointers over the last 10 games for New Orleans.

The Milwaukee Bucks with a record of 24-13 are up to their usual winning ways, victorious in five straight. The Cream City is the third seed in the eastern conference as they have won seven out of their last ten games. Bucks are averaging 113.9 points, 45.0 rebounds, 23.8 assists, 8.2 steals and 3.8 blocks per game while shooting 46.3% from the field. Milwaukee has allowed 109.0 points per game as the 15th best defence in the league.

The Cream City is led by the Greek Freak aka Giannis Antetokounmpo as he is shooting 53.0% and averaging 26.4 points for the Bucks while pulling down 11.4 rebounds. Demarcus Cousins has been a great pickup for the Bucks as he has averaged 11.1 points with 6.6 rebounds and 1.3 assists in 19.2 minutes.

After struggling with injuries and COVID issues for a large portion of the season, the Bucks are relatively healthy right now and looking more like the team that won the World Championship last season. New Orleans could have Brandon Ingram back, but they now won’t have Jonas Valanciunas. The Greek Freak would dominate the Pelicans, especially in the paint without Valanciunas. Hence the Milwaukee Bucks are favourites to win this game against New Orleans Pelicans.

How to watch New Orleans Pelicans vs. Milwaukee Bucks?

All NBA games will be available to stream live on the official NBA League Pass. The game between the New Orleans Pelicans and the Milwaukee Bucks will also be locally telecast on Bally Sports New Orleans and Bally Sports Wisconsin.