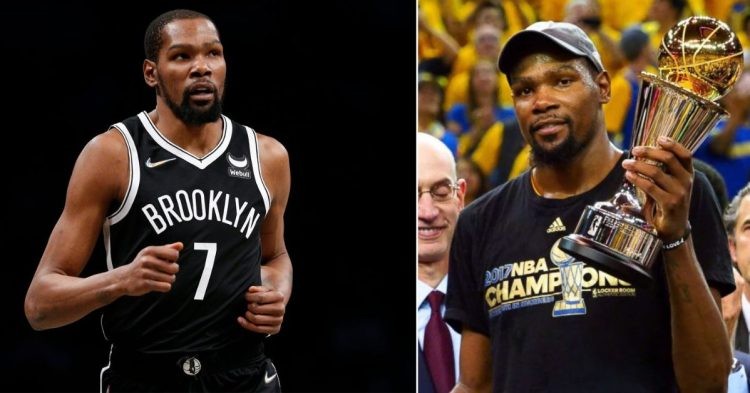 Kevin Durant of the Brooklyn Nets has had an extremely decorated career. The man has 2 rings and 2 finals MVPs from his time with Stephen Curry and the Warriors. Not only that he also has a regular season MVP award from his time with Westbrook and the Thunder.

Kevin has done all that there is to do on an NBA court. He is widely regarded as one of the best scorers that the NBA has ever seen. It’s tough to leave him out of the list if you take a look at the kind of things that he does as a 7 footer. Having achieved everything, Durant recently hinted at retirement in an exclusive interview. Let’s have a look.

Durant has never seemed like the type who will spend his entire life playing in the NBA. The rumors of him retiring are going around as strongly as ever despite addressing the situation back in August.

Recently in an interview, Durant spoke on his legacy in the NBA. Here’s what he said. “You got to win before you retire and make sure your legacy is straight,’ that’s bulls–t to me. My legacy is predicated on what Cam Thomas is learning from me and what he’ll take away to help him by the time he’s in his 10th year. That’s my legacy. What I did with Andre Roberson, the confidence I helped him build when he was in the league. That’s my legacy. Being able to play with Russell Westbrook, Steph Curry, and Kyrie and still be me. Yeah, that’s my legacy. That’s who I am. That’s what I bring to the game.”

When will Kevin Durant retire?

Durant has been a top 10 player in the NBA for the better part of a decade now. If he wishes to hang up the boots, then all we can do is appreciate him for the legend that he is. Though KD still has some work to do and probably won’t be done with the NBA for at least 3 or more years.