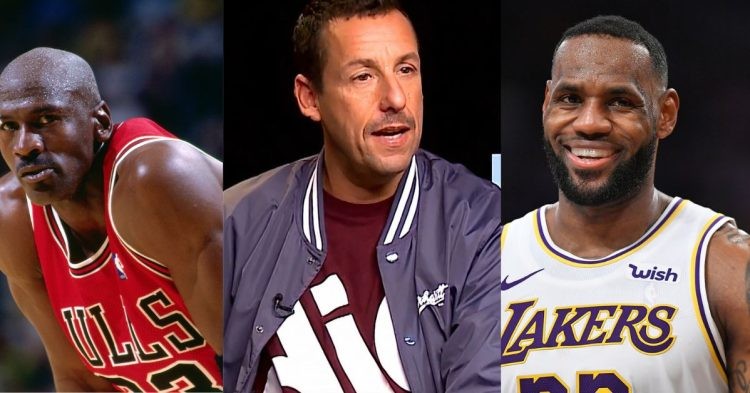 Everyone has an opinion on who is the greatest player in NBA history. The majority of NBA analysts have Michael Jordan and LeBron James dominating the top of this figurative “Mount Rushmore” of basketball. However, Adam Sandler has neither of them on his personalized list.

Sandler has always been passionate about the NBA. He is well connected with influential members of the organization as well as players. He came on Shaquille O’Neal’s podcast and discussed his own Mount Rushmore of basketball.

The list of players chosen by Adam may come as a surprise to many. However, it is important to note that this is completely his own perspective. It is perfectly okay to not have Michael Jordan or LeBron James on your all-time top five list.

Shaq was conducting the podcast. Additionally, he is also an extremely close friend of Adam. Therefore it was no surprise to see that he was on Sandler’s Mount Rushmore. These were his choices.

“I’m going to go with Shaq… No you know I love Shaq… Dr. J meant a lot to me. Iverson was one cool basta*rd, you like Iverson right Shaq. We gotta get the Kobe Shaq team going again”

Sandler was then pressed by everyone to reveal a final name. He initially hesitated. However, he soon obliged to do so.

“Okay, you want one more Fine we creating our own But if I need a 5th I’m gonna go with .. Bob McAdoo!”

Bob McAdoo is a player from way back in the 1970s. He is a 5-time All-Star and won the MVP award in 1975. Additionally, he also won 2 championships with the Los Angeles Lakers. Bob may have been a threat back in the day, but one must wonder whether Sandler put much thought into his final choice.

LeBron James and Michael Jordan were not insulted

Perhaps, these are not even the players Adam considers to be the best. They could just as easily be the players he likes or admires the most. Therefore, LeBron James or Michael Jordan may not meet the criteria. This is simply because people appreciate different types of basketball skills.

Some people may have Giannis and his play higher in their eyes, others Steph Curry or Kyrie Irving. Giving these players their props and credit through these personalized Mount Rushmores could be considered better than sticking to a rigid, unmovable top 5.