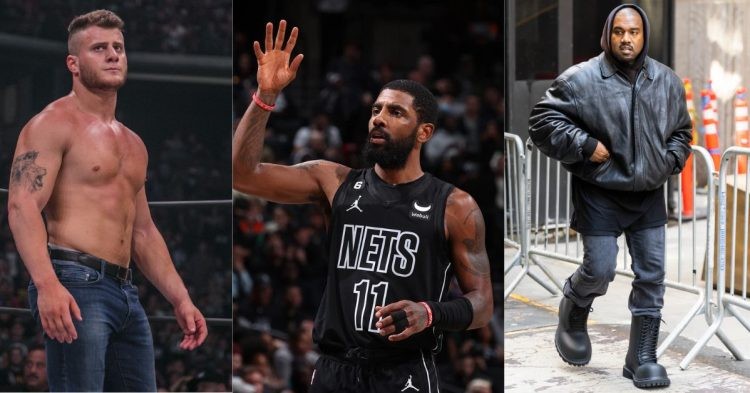 MJF in the ring, Kyrie Irving on the court and Kanye West walking on the street (Credit: Twitter)

AEW star MJF aka Maxwell Jacob Friedman threw some serious shade toward Brooklyn Nets star Kyrie Irving and Rapper Kanye West. Most NBA fans are familiar that both Kyrie and Kanye and under serious scrutiny and criticism for their recent anti-Semitic behavior.

The AEW aka All Elite Wrestling is based in Jacksonville and is a professional wrestling promotion. It is the next biggest thing when compared to the WWE.

MJF is certainly a popular wrestler. He holds both the AEW world championship and the AEW dynamite diamond ring. He shared his thoughts about this whole anti-Semitic situation. Now that we know who Maxwell is, we should wonder what he had to say about Irving and West. Moreover, understanding why he feels this way is also important.

How did Kyrie Irving perform in his NBA return after suspension?

Kyrie got off to a slow start in his return after suspension. He scored 14 points and 5 rebounds. Moreover, he didn’t have a single assist in the game against the Grizzlies. We should wonder if the recent criticism has ratted him to some extent.

We think it is important to mention that MJF is a Jew. Therefore, it makes quite a lot of sense for him to feel strongly. Nonetheless, one could argue that he went a bit overboard in his recent statements.

“I think Kyrie and Kanye are… interesting. I think their beliefs are interesting, and by interesting, I mean fu**ed up, and if anybody condones it, I think you’re a fu**ing loser.”

MJFhas suffered anti-Semitic mistreatment in the past. As a result, he called out anyone who dared take the other side on this issue. These kinds of statements end up complicating the issue furthermore. Everyone is certainly entitled to an opinion. However, claiming that anyone who has a problem with Jews is a “fu**ing loser” might come across as racist in itself.

Either all religions and ethnicities should be free game to be criticized. Or none of them should be. However, creating a form of blanket immunity for Jews alone might not bode well with the rest of the world. This should truly make us wonder if Kyrie would have faced the same amount of persecution, had he posted something offensive to a comparatively less influential religion like Buddhism or Hinduism.

In any case, we are left free to decide whether we agree with what MJF is trying to say in a crude and blunt manner.