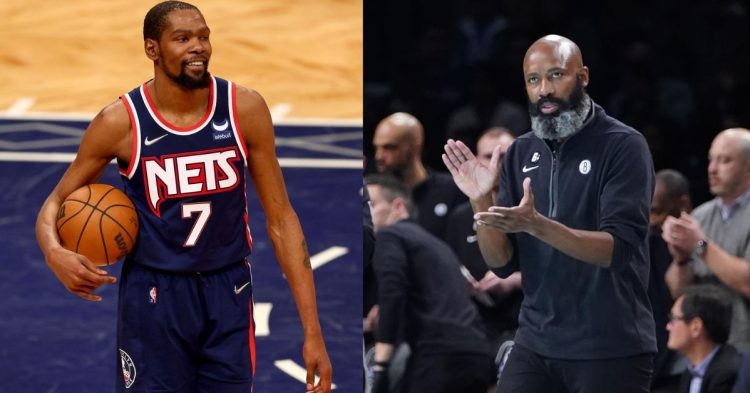 Kevin Durant and Jacque Vaughn on the court (Credit: Twitter)

Kevin Durant recently revealed the real reason behind his asking for a trade from the Brooklyn Nets. As we all know, the 2x NBA champion requested a trade and a change in management during this NBA offseason. He soon met with the Nets owner and coach behind closed doors and we assumed they resolved the issue.

However, the Nets decided to make a move as the season started going downhill. They parted ways with Steve Nash and replaced him with Jacque Vaughn, the assistant coach who stepped in during Nash’s abrupt exit.

Things got slightly better for KD and the Nets as they even went on a small win steak. This was despite not having Kyrie Irving. Durant shared what he didn’t like about the Nets in a recent interview. We should wonder what he said, now that the Nets have a new coach and everything seems to be going more his way.

To quickly recap, KD left OKC to join GSW and win NBA titles. After he had done so, he decided to leave and take his talents to the Nets. This was also to play alongside his friend Kyrie Irving. He was injured and rehabilitated during his first year with Brooklyn. In the second year, they were eliminated by Giannis and the Bucks. Finally, they were swept last year by the Boston Celtics.

This was the context under which KD decided to ask for a trade earlier this year. We didn’t have specifics on what problems he had and were forced to speculate at the time. Thankfully, he clarified what he felt.

“It wasn’t difficult at all to request a trade because it was about ball. I went to them and was like Yo, I don’t like how we’re preparing, I don’t like shootarounds, I like practices, I need more. Get my ass in film if you think that’s going to help you get on everyone else’s head. I want to do closeouts. I want to work on more shell drills at practice.”

Durant went on to reiterate that he was doing his best and asking the same for the team, “Ask Steve Nash, you can go call him right now. I would say Yo I need more closeout drills. We need to practice more. That’s what I was on. I wasn’t feeling that and nobody was on that same vibe as me. Jacque Vaughn is…”

We should wonder whether Nash actually got it wrong when it came down to how the team is being coached. The success of the team moving forward will decide who was right in their approach. In any case, we know that KD is pleased with the new direction the Nets seem to be moving in.
Tags: Brooklyn NetsJacque VaughnKevin DurantNBA
Previous Post