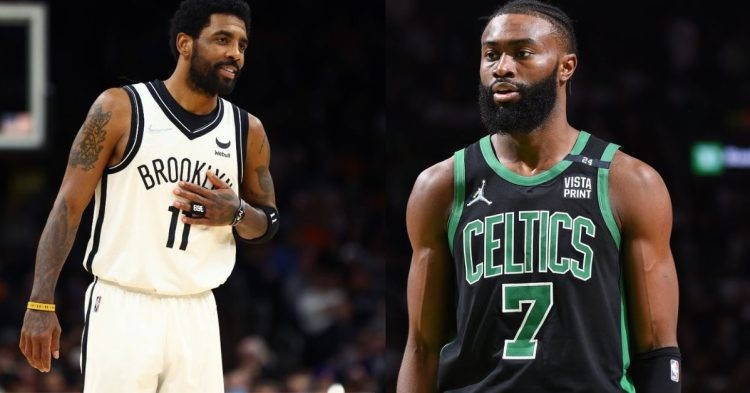 After Kanye’s anti-Semitic remarks, Brown swiftly ended his association with the rapper with a detailed Twitter post.

However, Brown is upset with the terms and conditions that the NBA has forced upon Kyrie Irving due to him fanning the flames of Kanye’s anti-Semitic remarks. The Brooklyn Nets handed Kyrie a minimum five-game suspension for his anti-Semitic posts and refusal to apologize.

When will Kyrie Irving return to Brooklyn Nets?

Jaylen told Gary Washburn, “I don’t believe Kyrie Irving is anti-Semitic.” “I don’t think people in our governing bodies think he’s anti-Semitic. He made a mistake. We understand from an outside perspective how important sensitivity is to not condone hate speech and not condone anything of that nature.”

“It’s sensitivity to the dialect around that. We don’t want to stand up for somebody in order to not condemn hate speech, but I don’t believe Kyrie Irving is anti-Semitic. And hopefully, the NBA feels the same way.”

“The terms for his return, they seem like a lot, and a lot of the players expressed discomfort with the terms. He made a mistake. He posted something. There was no distinction.”

Kyrie apologized after receiving the suspension, but Brown has voiced his concern regarding the severity of the conditions that the NBA put forth to end Kyrie’s suspension and revealed that he has been in conversation with Kyrie and NBA commissioner Adam Silver.

Jaylen Brown defended Kyrie, stating that the Nets’ star is anything from antisemitic and that he made a mistake. Brown also stated that the NBPA does not condone any form of hate speech and expects that the NBA will be lenient towards Kyrie’s suspension by minimizing the demands it has put forth.

As of now, Kyrie’s return to the Brooklyn Nets seems inevitable following his public apology through his Instagram post for his behavior. It is only a matter of time before he meets the other demands of the NBA and returns to his dazzling performances on the NBA court.

The Nets and the NBA are hopeful that Kyrie educates himself on the sensitive topics of hate speech after speaking to prominent Jewish leaders and educating himself on anti-Semitic issues, and comes out of the whole fiasco as a better human being.