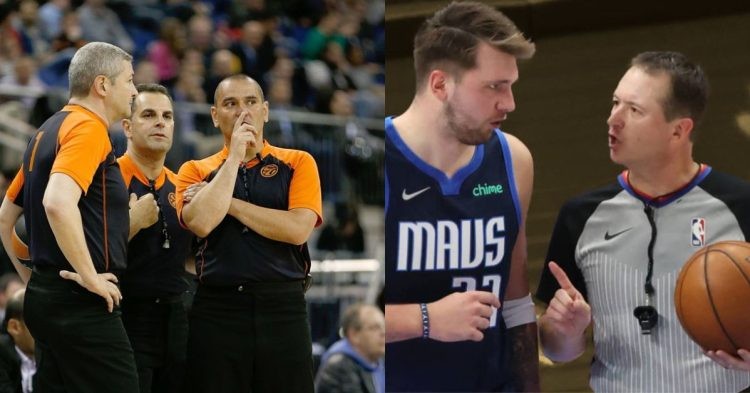 Luka Doncic with NBA referees and EuroLeague referees on the court (Credit: Twitter)

Some fans feel think what recently happened to a Referee of a EuroLeague game might just need to happen to NBA Referees as well. As we all know, NBA officials have been called out several times already this season by superstars like Luka Doncic. Some of the questionable foul calls and intolerance to harmless interactions between players have earned them a lot of criticism.

When the EuroLeague decided to suspend one of their officials for making bad calls, this urged the NBA community to speak up and remind us about the problems with NBA referees. One might be interested in knowing the various perspectives that fans are discussing on this subject.

Human beings certainly make mistakes. However, when it affects the outcome of a game in a professional setting, these mistakes must be taken slightly more seriously. As a result, Finn Arre Haliko has been suspended from refereeing after making a questionable call in a game between Red Star and Barcelona.

The Euroleague has suspended a referee 4 games after missing an out-of-bounds call that could’ve affected the outcome of the game.

Should the NBA adopt this ruling? pic.twitter.com/e1lGYsylK0

This was during the 16th round of the EuroLeague. The game was in its final seconds and Nikola Mirotic made a three-point shot with 3 seconds left in the game. As a result, Barcelona ended up winning this game. However, footage soon indicated that Mirotic stepped out of bounds at the moment he received the ball. Therefore, it should have technically gone to the other side and the three-point shot should have been nullified.

Suspending him still doesn’t change the outcome of the game

Accountability is never a bad thing

None of this happened and Haliko missed a call that would have changed the outcome of the game. Most NBA fans approved of the decision by the EuroLeague to suspend him. As some of us remember, NBA referees have made even more questionable calls in recent times.

The NBA would be out of refs if this happened.

Wont work cuz theres a referee union in the NBA

Fans are also demanding that the NBA incorporate these types of rules in their matches as well. However, as one pointed out, the referees have a union in this league that would likely prevent this form of punishment. In any case, hopefully, the NBA realizes that some referees tend to abuse their power. After all, this was just a case of not noticing a mistake, as opposed to making a bad foul call with no real justification.