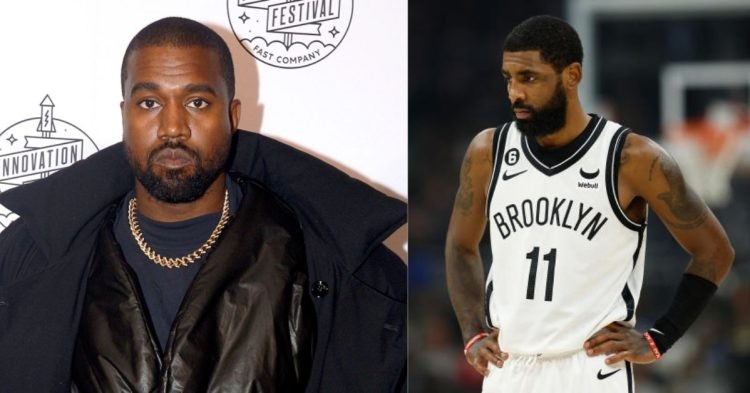 Kanye "Ye" West at a photoshoot and Kyrie Irving on the court (Credit: Twitter)

News about Kyrie Irving showing support for an antisemitic documentary has the NBA world engaged and curious. Kanye West also known as “Ye” showed support towards Irving’s beliefs as they coincide with his. Both these personalities are considered to be eccentric by the general public.

Kyrie and Kanye lost a combined $2.35billion this month fucking w the Jews.

We all know how sensitive the modern-day world is. Kanya’s controversial comments against the Jewish community created quite a bit of backlash. In fact, Adidas ended its partnership with Ye. By doing so, they effectively took his billionaire status away from him.

If niggas think Kanye and Kyrie are bad, they need to be glad Kendrick doesn’t talk because he said all this two albums ago.

Coming back to Kyrie, after the NBA commissioner and Brooklyn Nets owner made statements condemning his behavior, he decided to apologize. This has led NBA fans to attempt to deduce the legitimacy of the apology and draw theories on why Kyrie finally took his words back. One should wonder what these NBA fans have to say and how much truth there could be to it.

The NBA and Brooklyn Nets decided to make the decision to suspend Kyrie for his recent behavior. According to the reports, he will not play in the next 5 games for the Nets and will sit out without pay. It seems that fans believe this harsh punishment helped speed up Kyrie’s decision to send out an apology.

However, the internet is divided on this issue. Some accuse the Brooklyn Nets star of “folding” and not standing on what he believes in when things get worse. Others are eager to defend him and claim that there is no connection between the decision to suspend him and the apology that came soon after.

Irving’s apology was quite heartfelt and honest in our opinion. He uses a line, “I want to clarify any confusion on where I stand fighting against anti-Semitism by apologizing for posting the documentary without context and a factual explanation outlining the specific beliefs in the documentary I agreed with and disagreed with.”

Quite a balanced apology from Kyrie. We have no way of knowing who exactly pressured him into making this statement. However, considering that he is on a short leash with the Nets over his behavior in the past few years, we can assume they played a large role in the decision to suspend him.

You do realize he went almost the whole last season without getting paid because of the shot right? Losing money doesn’t hit KI the way some of us “fold” when the money gets involved

Some fans think Kyrie folded and choked under the pressure of the officials. Others defend him, claiming that a 5 game suspension couldn’t possibly worry or tense Kyrie about his financial situation. We should decide for ourselves whether he deserves this punishment.