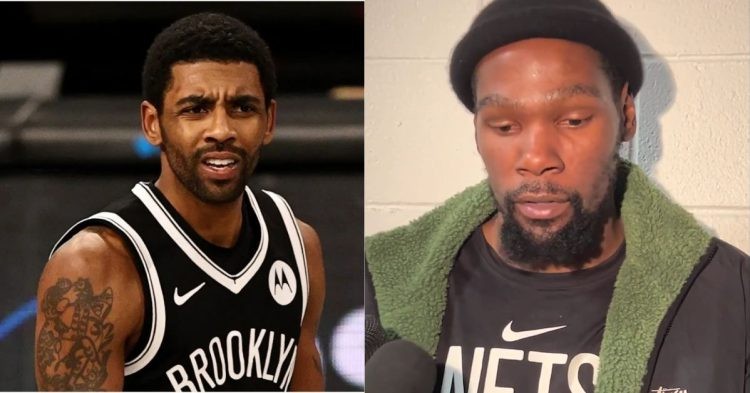 News spread like wildfire as we found out Kyrie Irving is under scrutiny for his recent actions and alleged anti-Semitic behavior. Racist behavior is quite the trend in today’s world and the media had a field day talking to everyone involved. Kevin Durant is one of the first players who was questioned about Irving’s actions.

We all know that KD just likes to play basketball. Therefore, he shrugged off the media questions and made claims that they were the only ones who cared about this whole issue. He also went on to explain that Irving’s post did not change anything for the Nets as a team or in their locker room.

Since then, a lot of events have occurred. the NBA commissioner released a stern statement condemning Irving and expressed his intention of meeting with Kyrie. Soon after that, we received news that Irving will be suspended for 5 games.

This led KD to share a tweet on social media to justify his perspective and stance from earlier before. One should wonder more about what he said and the context of this situation.

We are all human beings and entitled to designate importance to issues based on how we feel personally about them. There is no denying that racism and discrimination are some of the greatest evils humanity has produced. However, we shouldn’t expect Durant to treat it as something significant or even care about it.

While it seems crude to say that, one must forget that these are NBA players who just want to play basketball and don’t care about the drama. Here is a statement made by Durant when he first found out that this Kyrie issue was growing out of hand and asked about his opinion on Irving’s conduct.

“I ain’t here to judge nobody,  I just didn’t like anything that went on. I feel like it was all unnecessary, I feel like we could have kept playing basketball and kept quiet as an organization…”

Thus Durant concluded, “I just don’t like none of it”.

Unfortunately, KD knows that remaining silent on an issue is considered as bad as supporting it. After all, that is what NBA fans were accusing him of doing in regard to Kyrie’s actions. As a result, he sent out a tweet in an attempt to clarify his stance and perspective. Here is what it said.

“Just wanna clarify the statements I made at shootaround. I see some people are confused…I don’t condone hate speech or anti-semitism, I’m about spreading love always. Our game Unites people and I want to make sure that’s at the forefront.”

Just wanna clarify the statements I made at shootaround, I see some people are confused..I don’t condone hate speech or anti-semetism, I’m about spreading love always. Our game Unites people and I wanna make sure that’s at the forefront

This was a good idea for Durant to send out this tweet. Hopefully, people are able to move away from this issue and focus on basketball. It is a sport that unites people and we shouldn’t forget that due to Irving’s erratic actions.