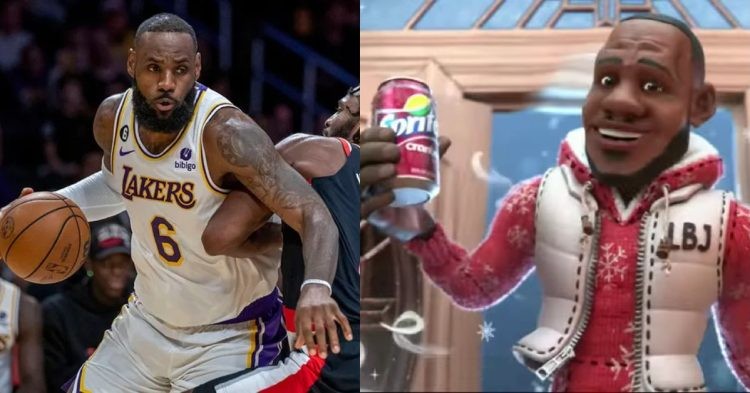 LeBron James on the court and in the Sprite Cranberry advertisement (Credit: Twitter)

The internet does not seem to be done with NBA superstar LeBron James. After the “LeLiar” memes went viral, another meme has come up concerning him. Not many people are familiar with the origins behind these memes or why they become popular on the internet.

With that being said, let us take a look at the current meme in question and understand its context. NBA fans are certainly taking a chance to slander the King considering his team’s poor performance. In all fairness, LeBron haters would be a better word to describe them with. They do this merely for attention and to gather a feeling of amusement from the public. Here is what this is all about.

This all began with the 4x NBA champion deciding to advertise for “Sprite Cranberry.” As some of us would already know, Sprite is a part of Coca-Cola, a soft drink company. This advertisement was animated and played during Christmas time.

In all fairness, it was actually quite effective. The sales for Sprite Cranberry increased significantly thanks to LeBron. However, since he has already developed a reputation for deceit on the internet, Fans have decided to turn this advertisement into a meme as well.

LeBron bouta make a commercial with Sprite about the lying memes

Is it just me, or am I the only one that wants the Lebron James Sprite commercial to become the next big meme?

The joke appears to be simply based on the fact that LeBron James just abruptly entered somebody’s house and offered them Sprite Cranberry, “Wanna Sprite Cranberry?“. NBA fans simply loved this commercial and wanted to see it every year and for it to always be associated with the Christmas Spirit.

Unfortunately for them, LeBron ended his endorsement with Coca-Cola and decided to sign up with Pepsi, another famous soft drink company. Some people even feel a sense of loss knowing that they will never see this particular advertisement again.

I saw a sprite cranberry commercial but it’s not the Lebron James one…
What…happened??? Wheres my holiday meme??? pic.twitter.com/uxrLM5ZORP

In any case, this is one of the more positive memes that are created as opposed to ones that are meant to insult or slander LeBron James in some form.