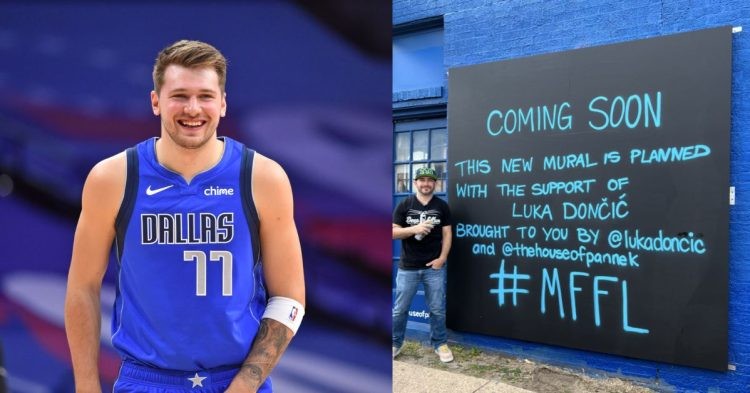 Luka Doncic this season is playing an unreal level of basketball for the Dallas Mavericks. He is single-handedly keeping the Mavs season alive. In some of the games, he is dropping historic figures and is a legend in the making. However, a mural was painted outside St. Pete’s Dancing Marlin bar. The Dallas Mavericks owner was not pleased with the mural.

The mural consisted of Luka holding a sign which said, “Please send help.” Cuban felt that the mural was disrespectful, “It’s disrespectful. But it’s your choice to do what you want. If that’s the way you want to be a fan, go for it.” said Cuban. However, the artist has erased the mural with black paint.

A Luka Doncic mural has appeared in Dallas…

His 43-point performance with 7 assists, and 11 rebounds, where his team lost against the Los Angeles Clippers 113-101. Whereas every other player scored less than 16 points. Another example is when Luka dropped 51 points, 9 assists, and 6 rebounds, in the razor-thin win against the San Antonio Spurs, 125-124.

Such performances from the Slovenian have fans questioning, how long will Luka carry the entire team. It is no disrespect to the other players in the Mavericks, but the excellent performances from Doncic to keep the Mavs in contention for the championship.

What did Luka Doncic request the artist, Preston Pannek, for the upcoming mural?

Preston Pannek’s mural of the Slovenian with the, “Please send help” message along with four of his stat lines attracted a lot of fans. It even attracted the attention of Dallas Mavericks’ owner Mark Cuban, who found it disrespectful. However, that artist has sent out an apology to anyone who felt disrespected by the mural.

“It wasn’t my intention to to antagonize anyone,” Preston said. “I was having a little fun, but some people took it the wrong way, thinking that I was talking about the players.” He has taken the mural down with black paint.

After erasing the mural with black paint, Preston’s wife, Adrienne Creasy-Pannek spray painted, “Coming soon, this new mural is planned with the support of Luka Doncic, brought to you be [lukadoncic] and [thehouseof pannek] #MFFL”, it most definitely looks like Doncic loved what the couple did, and will be with them on the upcoming mural.