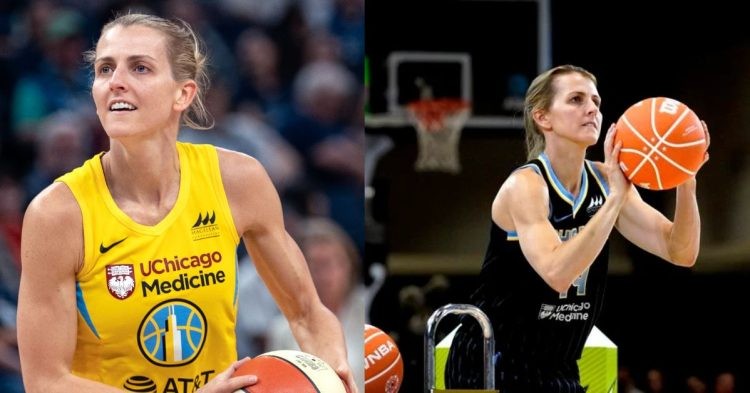 The WNBA All-star games are a series of events that occur much like the NBA All-star games. Additionally, there are “4-point” shooting contests, similar to the NBA three-point shooting competitions. Alexandria Quigley made history with the most made shots in this event.

This is quite a unique tournament and displays the skills of the talented women basketball players in the world. Therefore, it is important to know who she is and how well she did.

There is no other way than to say that this is very impressive. Quigley is from the Chicago sky and has averaged 11 points, 2 assists, and 2 rebounds in her career. Moreover, she has shot 45% from the field and 39% from the three-point line. She is nothing short of a deadly marksman by any stretch of our imagination.

As shown, she knocked down back-to-back “4-pointers” in order to sail to an easy win. Some of the shots counted for more than a single point such as the “money ball“. However, this does nothing to diminish the greatness displayed.

The internet is also filled with people who will find a reason to criticize this achievement. Or they will discuss how the WNBA players get paid less by using Quigley as an example. Yet, the reality is there are very few players who can display that amount of efficiency under pressure. Especially, from a different range of shooting than the standard regulation.

The NBA is a business much larger than the WNBA. Therefore, it is quite improbable for the salaries of players in their respective leagues to match at any level. However, if the WNBA women display this level of marksmanship in general then perhaps they all deserve an increase in salary.

One could argue that this is all possible, but the decision lies with the management and franchise owners. This also comes down to the revenue the WNBA generates for itself and whether it can meet its players’ demands. However, discussing the “good” but not “good enough” salaries of the players will not change their abilities to display greatness. At the very least, Alexandria proved that the WNBA women can shoot too.