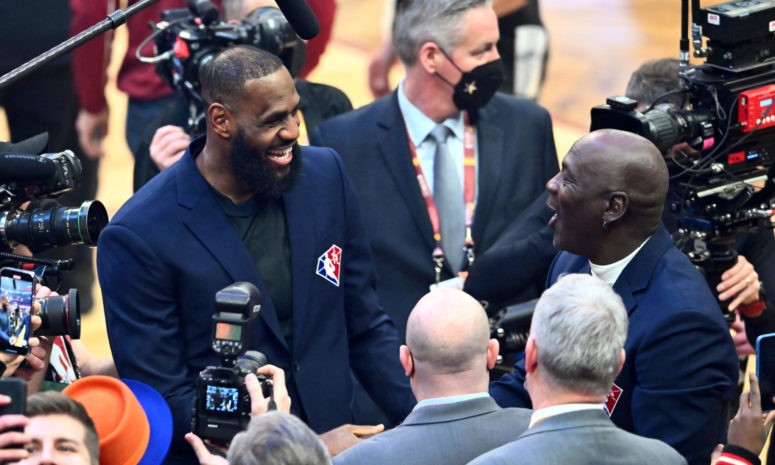 The National Basketball Association has marked this season with celebration. It has been 75 years since its formation and the league has produced a storied legend full of great players and even greater moments. To honor the same, the association announced its 4th ever anniversary team, the NBA 75th Anniversary Team, headlined by Michael Jordan and LeBron James.

NBA commissioned and aired a promotional film to mark its 75th anniversary. Likewise, part of the All-Star festivities was a historic photo shoot to commemorate the occasion. A camera lens has never been tasked harder with capturing the essence and greatness in front of it. However, some stars could not make it.

Among them are Michael Jordan and Kevin Durant. Kevin Durant’s absence was due to his grandmother passing away ahead of the All-Star game. On the other hand, MJ had his priorities sorted.

Jordan is an owner of 23XI, an American professional racing team that competes in NASCAR. And the Hall of Famer was out in support of his team in their most important race of the season, Daytona 500.

Welcome to the #DAYTONA500, MJ! pic.twitter.com/RrtDlSDH7x

Michael Jordan makes it to the All-Star game

While fans were still not over the GOAT ‘snubbing’ the meet-up, Jordan being Jordan made it to the All-Star game. Just in time for the halftime presentation that gathered all the 75th Anniversary Team members in the middle of the court. The fans, though, had an alternate theory for his arrival.

michael jordan rushing on a private jet to cleveland after seeing a card game in the team durant locker room: pic.twitter.com/fv3Zwp8Pj0

Beyond this hilarious interpretation, MJ really did make it to the All-Star game and shared some great moments. He shared a hug with LeBron James, the only player to challenge his claim of being the greatest of all time.

While it was Steph Curry who went nuclear, the ultimate game-winning shot was drained by the hometown hero, LeBron James. Guess that’s what an MJ hug does to you.