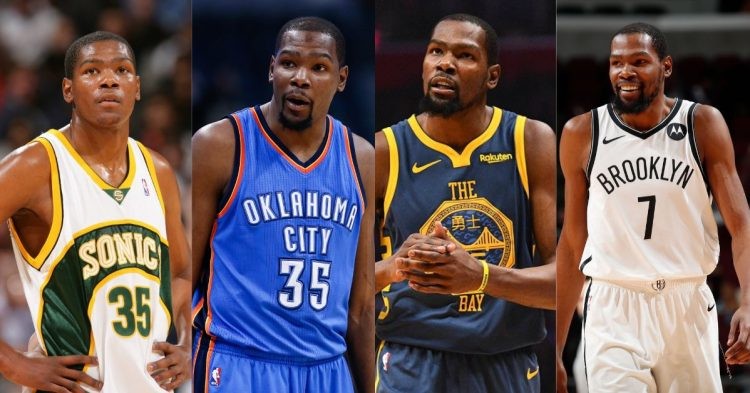 Kevin Durant has had an illustrious career in the NBA. He has played for multiple franchises in the league as he made a mark as one of the best basketball players in the world. People often overlook his name in the conversation of the best. However, he should be one of the most unique players in his position, considering his height and his ability to make exceptional plays despite that.

KD has played 939 games during the regular season in his career. If the accolades won were not enough, he has the stats to back him as one of the best players as well. In those games, he has averaged 27.2 points, 7.1 rebounds, and 4.3 assists. Quite impressive for an overrated player, as his haters claim. Let’s have a look at how he fared in the teams he has been a part of in his career.

Which team did Kevin Durant play for in his rookie year

The Seattle SuperSonics drafted Durant as the second overall pick in the 2007 NBA Draft. Later that season, he went on to win the Rookie Of The Year award. It was the start of a special career. His averages for that season were 20.3 points, 4.4 rebounds, and 2.4 assists in 80 games for the Seattle Supersonics.

KD announced himself to the world in style after bagging the ROTY award, and he stayed with the Seattle SuperSonics for years to come. However, due to financial difficulties in Seattle, the team moved to Oklahoma to become the Oklahoma City Thunder in 2008. It was at OKC when Durant made himself to be known as a powerhouse in the league. He led the team together with Russell Westbrook, who they drafted in the same year.

It is no secret that the most successful team that KD has been a part of are the Golden State Warriors. On July 1 2016, he was an unrestricted free agent. It was then he decided to join the Warriors on a two-year deal that was worth more than $50m.

With the Warriors, Kevin Durant helped to create a dynasty and won two consecutive championships in 2017 and 2018. He was one of the main faces of the team, together with Steph Curry, Klay Thompson. He was expected to be part of the team in the long-term as well. Durant averaged 25.8 points, 7.1 rebounds, and 5.6 assists in the first three years during his time with them. Together with that, he won back-to-back Finals MVP in the years GSW won the title.

The 33-year-old chose to leave the Warriors as he mentioned, “I just felt like I needed a switch”. He signed with the Brooklyn Nets in 2019, when Kyrie Irving also joined. The Nets were one of the favorites with their star-studded team. They could not manage to make a solid impact on the league as they only played 16 games together.

Despite the team’s overall results, Kevin Durant still shined as the team’s best player. He made 29.9 points, 7.4 rebounds, and 6.4 assists per game in the 2021-22 season. He has been one of the major figures in basketball for a long time and he will be for times to come.

If he chose to end his career now, he would look back on a great career that could’ve been better if his decision-making off the court was better. Currently, signs point to the fact that KD will stay with the Nets for the 2022-23 NBA season.