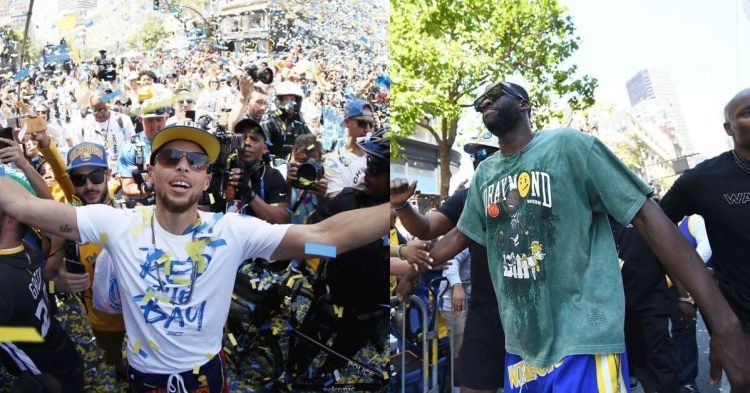 Stephen Curry, Klay Thompson, and Draymond Green have led the Golden State Warriors to their 4th NBA championship in an 8-year window. Winning an NBA title is a rare occurrence that several teams in the NBA have never accomplished even once in their years of competing.

This core has been responsible for creating a modern basketball dynasty. Therefore, the amount of admiration and respect they receive from the fans during the victory parade is unreal. Celebrating with the hometown fans is really what winning the title is all about. Here is how the victory parade went down.

The Golden State Warriors were befittingly treated like royalty

In modern times, an NBA superstar is treated just like an actor, politician, or any other celebrity. They are always in the limelight. Moreover, when the home team wins a title this is a matter of true achievement for the athlete. This is what GSW has done. They won 4 titles for the fan base. Therefore, celebrations of the highest order were due.

The entire team boarded a double-decker bus and were driven through the street. Gary Payton II, Jordan Poole, and the other first-time champions truly seemed to enjoy themselves. They sprayed the delighted fans with water from their water guns. Additionally, they also popped champagne and sprayed it into the crowd.

The veteran Warriors core relished this experience the most. They won their first title in 2015. Therefore, this 2022 championship speaks to how long they have been dominant. Steph, Draymond Klay, and their coach Steve Kerr all made statements to the audience. However, it is interesting to note that each of them had a different message to share during the celebration.

Steph, “The Golden Boy” of the NBA, was definitely the main reason Warriors fans went crazy during the parade. He is a lifelong GSW player with no plans to switch teams. Therefore, the adoration for him along is truly great in the Bay area. He is also extremely grateful to the fans and explained how entertaining them and giving them a reason to be passionate, while also trying to make history is the goal of his team.

Draymond has been the trash talker and defensive edge for the Warriors this season. Therefore, his message was to simply try to be as controversial as possible. He can say what he wants now that he won the title again. Not that he really held back in the last 2 years when people thought the dynasty was over.

Klay also chose to use his opportunity to make a humorous statement. He sarcastically explained how these “little wins” mean a lot, much to the amusement of Stephen Curry. However, he also went on a slightly more serious note to explain that Dub Nation has no limits and fans from all walks of life.

Perhaps Steve Kerr had the most balanced response. The GSW coach always believed in his team’s potential ever since he joined them. However, their disappointing season of missing the playoffs as a bottom seed in 2020 and getting eliminated in 2021 in the play-in tournament sent his team off the radar.

Kerr went on to explain that this is exactly why this seemed to be a surprise to the rest of the NBA. He went on to conclude that to be able to bounce back from where they were a few years ago is a testament to those guys.

Indeed, it is truly a testament to the greatness of this team. The core may have mixed messages to share. However, the feelings of pride, accomplishment, satisfaction, and simply greatness should be flowing through all their veins at the moment.