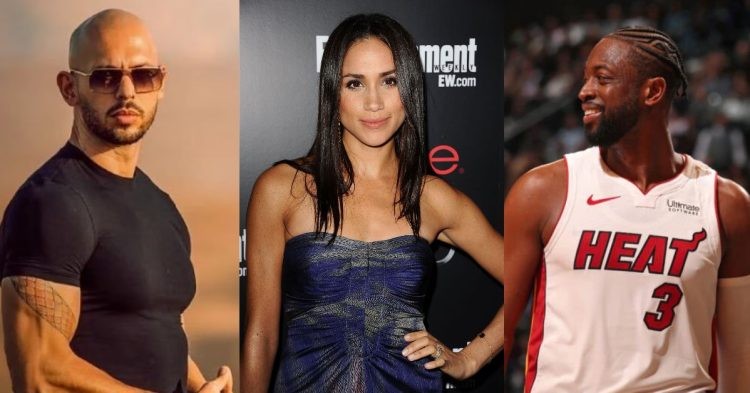 Andrew Tate ended up calling out former NBA star Dwyane Wade in a recent rant about Megan Markle. Some NBA fans might have heard about Tate, who has grown in prominence despite controversial statements throughout the internet. He has been making the rounds on social media due to thought-proving ideologies involving men taking back power and escaping “The Matrix.”

All this is well and good in a manner of speaking. However, it appears that Tate has a tendency to go overboard in his radical statements. As a result, he has perceived as a woman hater and a negative figure in the eyes of most of them.

Keeping in trend with that, Tate recently called out Megan Markle. She is no ordinary personality and is a popular actress as well as the wife of Prince Harry. Nonetheless, Andrew had no problem making distasteful comments and hurtling allegations toward Markle about her history with D-Wade and others.

Perhaps we shouldn’t take what Tate is saying too seriously, considering his history and reputation. He made claims accusing Markle of trying to sleep her way up to the top. This was clearly way back in the past when she was trying to make it as an actress. While Andrew offered no proof, we should still hear what he had to say. This is quite controversial and readers’ discretion is advised.

“Do you know who’s been inside of Megan’s body? A bunch of NBA stars, a bunch of NFL quarterbacks. She was some D-list Canadian actress trying to sleep her way to the top! Running around with this Dwyane.. He’s leaving holes, he’s messing it up…”


Tate went on to question whether Meghan could truly be satisfied by her husband after having been with several athletes like Wade. He left things somewhat open-ended by simply calling the athlete Dwyane. However, the only player in the NBA who have Dwyane as a first name is Wade. After all, his name is quite unique as opposed to the more common “Dwayne.”

Fans must be aware that Wade is happily married and even has children. Nonetheless, he has certainly known and met with Meghan in the public domain before. Therefore, Top G’s accusation might not be completely unfounded.