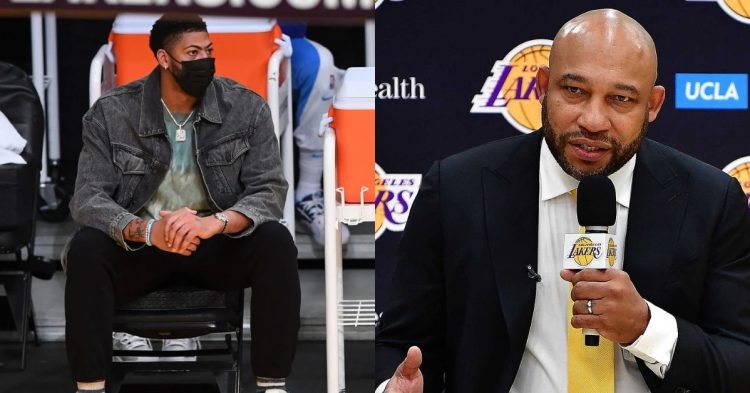 Anthony Davis wearing a mask and Darvin Ham in an interview (Credit: Twitter)

We still do not have confirmation that Anthony Davis will be playing for the Los Angeles Lakers. NBA fans might be aware that he has been on an incredible scoring streak. However, he came out of the game against the Cleveland Cavaliers only after about 8 minutes of action.

Some feared that this could be an injury, potentially his back. This would make sense considering the narrative of him being injury prone. But, it turns out that he was subbed out of the game due to potentially contracting Covid.

This is a post-pandemic era and the worst is behind us. Be that as it may, the team must display caution and follow regulations. With that being said, one might want to know when AD is expected to make a return to the court at the soonest.

Will Anthony Davis play against the Boston Celtics on Wednesday?

As already mentioned, Davis was on a historic scoring pace before being sidelined with fears of covid. In fact, some have even called his performance, “chamberlainesque” after NBA legend Wilt Chamberlain. Additionally, there were also talks of him being in the MVP conversation if he was able to sustain his recent surge in performance.

In fact, he was coming off a 55 points and 17 rebounds game against the Washington Wizards. Moreover, the Lakers have won 8 of their last 11 games largely due to Anthony Davis. Therefore, it certainly upset fans to see that he would not be returning for the game against the Cleveland Cavaliers.

Lakers coach Darwin Hamm discussed what Davis was going through, “His temperature was 101 degrees and changing… He wanted to play but was too weak. He is exhausted and dehydrated. With the way he’s been playing, that’s a major loss”.

This sounds somewhat alarming. We are glad the Lakers star was sidelined before things got worse. According to the NBA regulations, Davis will have to register two negative tests for Covid that are 24 hours apart. This is assuming, he does have the virus and not some other illness.

It also means he will mostly be missing the next game against Joel Embiid and the Philadelphia 76ers. Hopefully, if he gets treated well, we might see him back in action again against the Boston Celtics. Considering that they are currently the best team in the NBA, the Lakers will need AD in order to win that game.