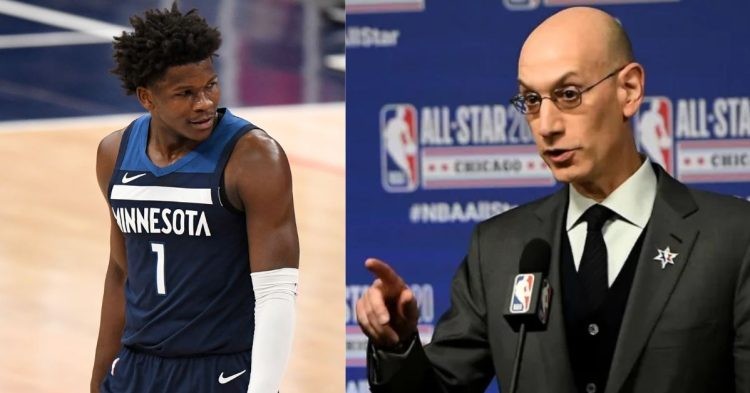 Anthony Edwards is a bright young star for the Minnesota Timberwolves. He managed to carry them into the NBA playoffs this year alongside Karl Anthony Towns and D’Angelo Russell. Additionally, he has also tried his hand at acting and was the antagonist in the movie Hustle starring Adam Sandler.

Despite having such a diverse interest range. Edwards is currently under the microscope for making certain comments on an Instagram story. The comment appears to hurt the feelings of the LGBTQ community. One must wonder what Edwards said and why he later decided to remove the story and make a public apology.

Anthony Edwards agrees that what he said was immature and disrespectful

The Timberwolves star shared an Instagram story where he appears to be inside a car with a woman. He focuses the camera on a group of LGBTQ allies together and makes a derogatory statement.

Anthony Edwards is wild for this man 😭 pic.twitter.com/ccSkkDfe1E

“Look at these que*r as* n*ggas man. Look what the world done came to bro.”

Moreover, the story also had the caption “Dese Niccas different (Laughing emoticons)”. This does not bode well for Edwards and his popularity. We are all becoming increasingly familiar with gender norms and how people feel the need to step outside societal boundaries.

There are several people who support LGBTQ rights and even more who question it. Anthony is a young man and just made a joke in the heat of the moment. Probably to impress the woman who was in the car with him. She ended up laughing at these comments despite their lack of class.

Instagram is a popular app and once he posted the story there was no going back. By the time he came to his senses and deleted it, thousands of people could have downloaded the story and shared it through other mediums such as Twitter. Edwards released a statement to mitigate some of the damage done.

Edwards apologized on Sunday, saying his words were “immature, hurtful, and disrespectful” pic.twitter.com/f1pq9H7XON

“What I said was immature, hurtful, and disrespectful, and I’m incredibly sorry. It’s unacceptable for me or anyone to use that language in such a hurtful way. There’s no excuse for that at all. I was raised better than that.”

The Timberwolves organization also released a statement condemning what Edwards did, ” We are disappointed in the language and actions displayed by Anthony Edwards on social media. The Timberwolves are committed to being an inclusive and welcoming organization for all and apologize for the offense this has caused for so many.”

We hope Ant-man has learned his lesson from this incident and does not repeat this in the future.