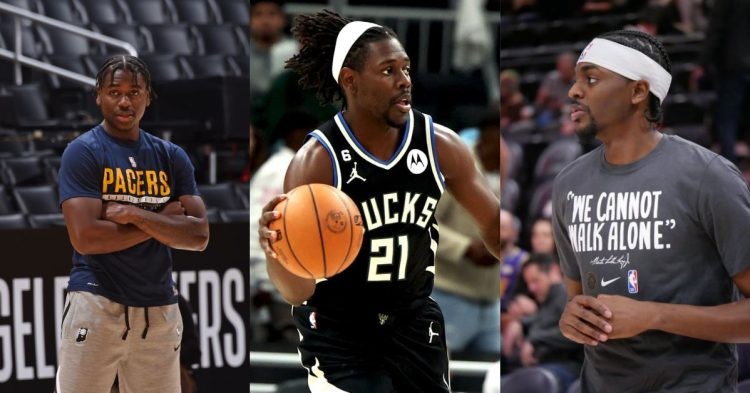 The first time we heard of a trio of brothers in the NBA was back when Lavar Ball was the most famous person on the internet. All Lavar would talk about was the Big Baller Brand, how he would beat Jordan in a 1v1 and how he will make sure that all three of his kids will play in the NBA.

The Holiday bros exchanged jerseys after they became the first three brothers to share the same court in an NBA game! pic.twitter.com/Ac0Whm9YGH

Well, it’s safe to say that Lavar did realize his dream of getting all his kids into the NBA but not quite since, LiAngelo never truly made it. Another trio of NBA brothers that we’re familiar with is the Holiday brothers. Jrue Holiday, Aaron Holiday, and Justin Holiday. All 3 are part of the NBA and didn’t need to count on fame or money to make it.

Who is the eldest among the Holiday brothers in NBA?

Among the three brothers, Justin is the oldest. But, in terms of who is the best at basketball it has to be Jrue. The man has been a solid defensive, playmaking point guard almost all his career. Jrue currently shares the court with Giannis on the Milwaukee Bucks.

He looks to improve to 6-0 in his NBA career against his brothers. #FearTheDeer pic.twitter.com/bKtlf0Nudp

The other brothers, Justin and Aaron Holiday are both solid bench pieces for their teams. Justin plays for the Atlanta Hawks along with his younger brother Aaron Holiday. The two of them might be brothers with one of the best 2-way guards in the league and still, they hold their own without any help or influence from their brother.

They were former teammates in Indiana pic.twitter.com/Ve61jg9J6C

Jrue Holiday on the other hand has only played for 3 teams over his relatively long career, the 76ers, the Pelicans, and now the best team in the league, The Milwaukee Bucks. Justin Holiday, the oldest is the only brother out of the three who wasn’t drafted out of college and had to take the tough route to the NBA.

Will Justin, Aaron, and Jrue Holiday ever take the court for the same team?

All of the Holiday brothers are exceptionally gifted athletes, and if the day comes when all three of them take the court for one team, it’ll be one of the best moments in basketball. It might somewhat be similar to the time when Giannis, Thanasis, and Kostas Antetokounmpo all became NBA champions in 2021.

Hopefully, this is something that we get to see before the Holiday brothers retire.