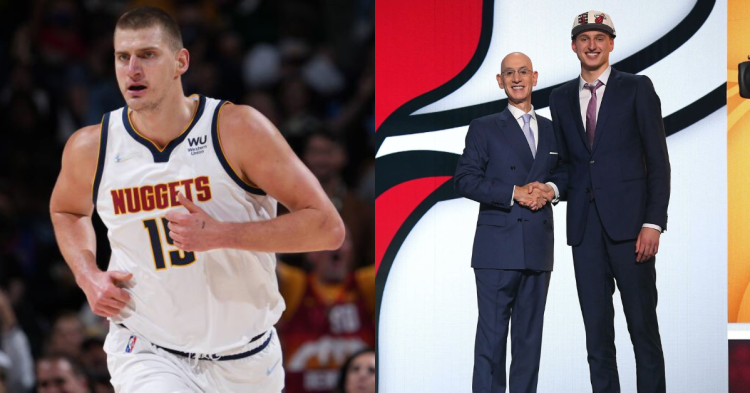 The 2022 NBA Draft just went by and with the 27th pick, The Miami Heat drafted a young Serbian player by the name of Nikola Jovic. The name sounds familiar, doesn’t it?

When Nikola Jovic and Nikola Jokic guard each other pic.twitter.com/hdHgEltwbF

Nikola Jovic may have been drafted for his basketball skills but right now he is blowing up on Twitter because of his name. His name is extremely similar to Nikola Jokic who is obviously an NBA superstar. Moreover, the rookie even looks a little bit similar to Jokic. This has led a lot of people to question whether the two of them are actually related? Well, except for the similarities in their names, Nikola Jokic and Nikola Jovic are not related to each other.

What are the similarities between Nikola Jovic and Nikola Jokic?

Well for starters we have their last name which differs by a single letter. After that, there is the fact that both of them are the same height, 6’11. They also play the same position with similar playstyles. Jokic is a playmaking center and so is Jovic.

But what they aren’t similar in is their skills. Jokic is the league MVP, he is the heart of the offense run by the Denver Nuggets. Nikola Jokic has done things on an NBA court that no other second-round pick has done. On the other hand, we have his doppelganger, Nikola Jovic. Well, comparing the two of these isn’t really fair to the rookie.

Jovic knows that Nikola Jokic is already an NBA legend whereas he is yet to even suit up for an NBA game. When asked about the similarities between them Jovic made it very clear that he can’t be compared to Jokic. “I just think our basketball IQ and passing, I think those are the two things we can kind of compare. He’s doing that on another level”, is what Jovic had to say when asked about the two.

“I just think our basketball IQ and passing, I think those are the two things we can kind of compare. He’s doing that on another level, and of course I’m looking forward to meeting him and playing against him.”

Jovic isn’t the only one who is waiting for these two to face off against each other.

Fans are obviously excited to see a matchup between these two. It’ll be interesting to see how this Miami Heat rookie fares against Denver’s MVP.