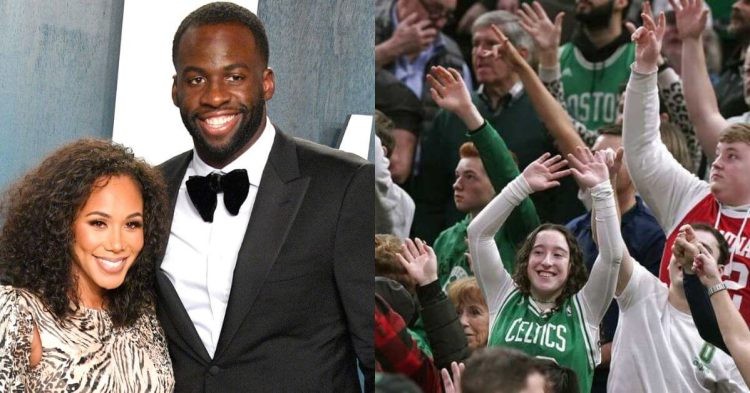 The NBA fans seem to have gotten out of control. Draymond Green, Stephen Curry, and the Golden State Warriors went to Boston for Game 3 of the NBA Finals. Reports have emerged that Draymond was harshly mocked and name-called by the Boston Celtics fans. It forced his wife Hazel Renee to speak out on the issue. The extent to which they took this will leave people stunned.

Fans always want to get under the opposing team’s skin. This is their way of also indirectly showing support and helping the team they support. However, it seems to have gone too far. Insulting a professional athlete who is under a pressure-filled situation should not be left unpunished.

Draymond Green’s wife, Hazel Renee, took to Instagram to call out Celtics fans for their ‘F**k you Draymond’ chants as well as calling him a ‘b**ch’ and a ‘motherf**ker’ in front of her kids. pic.twitter.com/v3E7kajQDL

There are young children present in an NBA game. Therefore, the usage of profanities should always be kept to a minimum. The problem was that Green was also having an extremely mediocre game. He has never been known for his offensive arsenal. However, he has always found a way to make himself useful in other facets of the game.

The former defensive player of the year was unable to accomplish this. He scored only 2 points, 3 assists, and 4 rebounds. To make matters worse, he was picking up quick foul calls and soon fouled out of the game. This led to the Golden State Warriors losing the game with the final score of 100-116.

The Boston Celtics fans let Green hear it. He is the easiest person to look at as a villain in their eyes. Additionally, Draymond and his antics have already found their way into the NBA Finals as he has gotten into scrappy arguments with Jaylen Brown and Grant Williams.

Hazel must have been horrified to hear her husband being called “a b*itch or a f***er“. She took to Instagram to voice her disgust at the behavior of the Boston Celtics fans. It is indeed sad that people forget basic human decorum and decency while engaging in these types of behaviors.

The NBA had ejected fans in the past for these kinds of acts. However, this is the NBA Finals. There is too much focus on the actual game and on creating a conducive atmosphere for the home team. However, having her children listen to the crowd forced Hazel Renee to speak up.