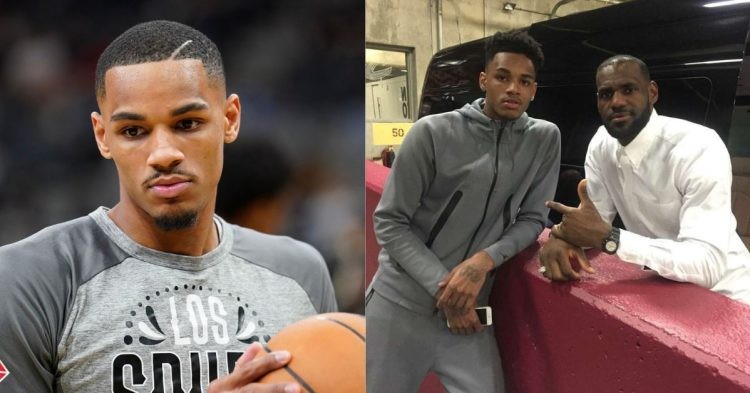 Dejounte Murray is a young and upcoming star in the league. He recently proved he is no ordinary player and made his first all-star team this season representing the San Antonio Spurs. This NBA offseason, Murray was traded to the Atlanta Hawks to play alongside Trae Young in the Eastern Conference. It would interest many people to know that Dejounte considers Lakers superstar LeBron James to be his mentor.

While there is always a sense of rivalry and even hostility in the league, it is essential to remember the players consider each other colleagues and actually care about each other. Thus, it is no real surprise that King James chose to mentor him. We should know what Dejounte said and how he paid his compliments to his mentor.

We are quite lucky that the Atlanta Hawks star shared this interesting piece of information with us. People are more cautious when complimenting people and hasty to criticize in general. Players do not typically reveal that they “owe” other players and that they were “helped“. After all, that would make it very difficult to compete with their counterpart at the highest level.

Nonetheless, Dejounte had no problem telling the media how he valued LeBron James, “Great man, great leader, great father, great basketball player. Somebody that took me under his wing around 17 years old… I’m just thankful to have somebody like that in my corner guiding me off the floor, and also on the floor.”

“Great man, great leader, great father, great basketball player. Somebody that took me under his wing around 17 years old. … I’m just thankful to have somebody like that in my corner.”

Unfortunately, Murray did not actually reveal how LeBron guided him and chose to keep that advice for himself. He seems to have taken it seriously and made a name for himself as a player in the league. Moreover, he even got to play alongside King James in Pro-Am games conducted this NBA offseason.

Dejounte has already created a persona of a villain for himself this summer. He got into a heated exchange with NBA rookie Paolo Banchero and even took the feud to Twitter. He will refrain from doing such things in the future if he wants to maintain as clean an image as LeBron has over the years in the NBA.