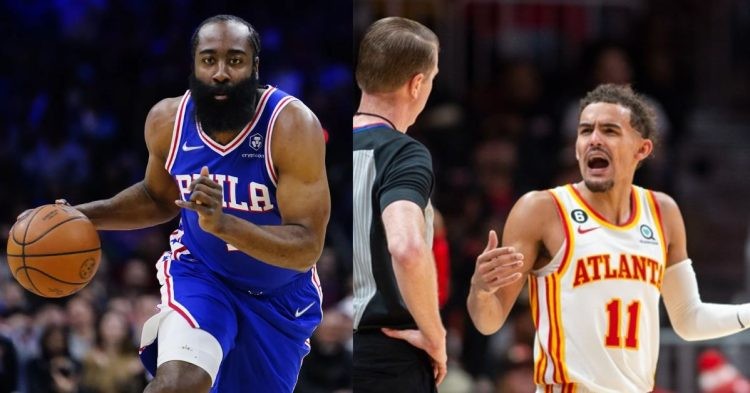 Trae Young and James Harden on the court (Credit: Twitter)

The critics against Atlanta Hawks star Trae Young seem to be growing. As we all know, Young was in the same draft as Dallas Mavericks star Luka Doncic. However, unlike Baby Bird, his playstyle and impact appear to be on a decline this NBA season.

Fans remember that Young could shoot the ball from distances that rivaled Stephen Curry and Damian Lillard. That brought about plenty of comparisons throughout his career. However, now he has been accused of being a foul baiter and simply using underhand tricks to score the basketball. Let us take a look at how much truth there is to all of this.

Fans put Trae Young on spot with a serious accusation

There is no arguing that Trae is a very creative scorer in the NBA. Nonetheless, the accusations against him have been piling up for years. Fans claim that he shows tendencies to flop and ask for foul calls. This is a habit that plagues the league where superstars exaggerate physical contact in order to get favorable calls, “Trae Young is so awful bro he can’t hit a shot so he foul baits.”

As we know, earning foul calls usually results in free throws. Something Young is quite good at, averaging 87.5% from the free throw line throughout his career. Since he is quite small, it would make sense for him to overact and pretend in order to shoot more free throws.


Fans have grown sick of this and truly detest this form of playing basketball. It is something that James Harden was doing during his time with the Houston Rockets. However, Trae is nowhere close to as efficient as the Beard was this season. He is shooting 41% from the field and 31% from the three-point line. Considering that he is expected to be an amazing three-point shooter, these numbers are quite low.

He’s been so unclutch this year 😂

Despite questionable antics, Trae is still averaging 27.3 points this season, slightly higher than his career average of 25.5. However, fans don’t consider what he is doing to be real basketball and are quite vocal about this.

They need to make a Trae Young foul rule this ant basketball anymore. Heck even Harden isn’t flopping this much

Why don’t people talk about Trae Young foul baiting as hard as Harden used to?

We hope that Trae is not being shown partiality in any form. It is difficult to blame the officials as Young’s acting is simply good enough to convince them that a foul occurred. Hopefully, this comes to an end in the near future.