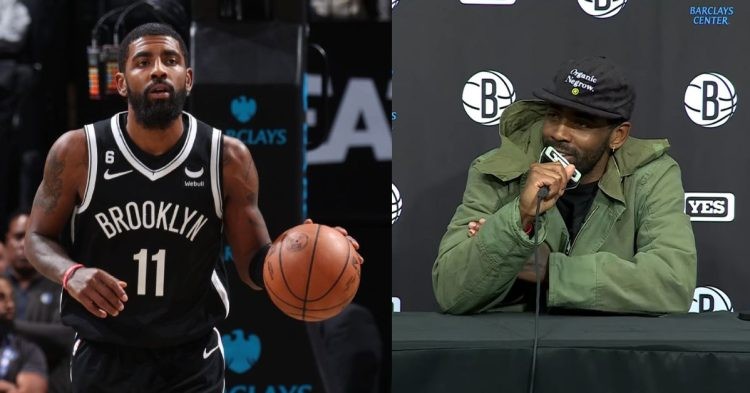 Kyrie Irving on the court and in a post-game interview (Credit: YouTube)

Kyrie Irving is finally back after a suspension by the Brooklyn Nets for his anti-Semitic behavior. The Nets faced the Memphis Grizzlies for Irving’s first game back. However, neither Ja Morant nor Desmond Bane played in this match and the Grizzlies were clearly shorthanded.

As a result, the Brooklyn Nets easily managed to win this game. Therefore, we could conclude that the lingering negativity surrounding Kyrie Irving has passed. However, it is too simple and early to say so. Kyrie has clearly been under a lot of pressure and fulfilled conditions before being allowed to play for the Nets.

We should wonder what he had to say about his performance in his first game back for the Brooklyn Nets. Additionally, an understanding of this situation moving forward will definitely be useful.

Is Kyrie Irving cleared of all accusations?

Kyrie Irving was accused of condoning hate speech and racism against the Jewish people. Many have defended him by citing his rights to speech and expression. However, the Nets clearly dismissed all of this and held him accountable.

This was largely due to the platform he holds in society and the “responsibility” that comes with it. Even if the act is something trivial like sharing a post on social media, the repercussions and influenced audience are certainly Irving’s responsibility.

The Nets even decided to counsel him and discuss his perspective. In fact, the Brooklyn Nets owner Joe Tsai met with Kyrie personally and seemed to be satisfied with the outcome of the meeting. There were additional criteria such as anti-Semitic training and counseling as well as “talking to Jewish leaders”.

Kyrie eventually returned for the match against the Memphis Grizzlies. He scored only 14 points on 5 of 12 shooting from the field. Irving shared his thoughts on his performance in the postgame interview.

“I mean you saw me dribbling the ball out there. I mean the ball was just miraculously going outta my hands. So that’s just the rust and you know just getting back into NBA basketball. There’s just no way I can create NBA basketball when I’m sitting at home with my friends…it’s just nothing like being out here.”

We are certainly happy to see the Brooklyn Nets star back on the court. It is unclear whether Irving has fulfilled the additional demands as well. Many thought they were bizarre and far-fetched. Therefore, it is completely possible that the Nets have put this behind them and are ready to move forward with Kyrie.
Tags: Brooklyn NetsKyrie IrvingNBA
Previous Post