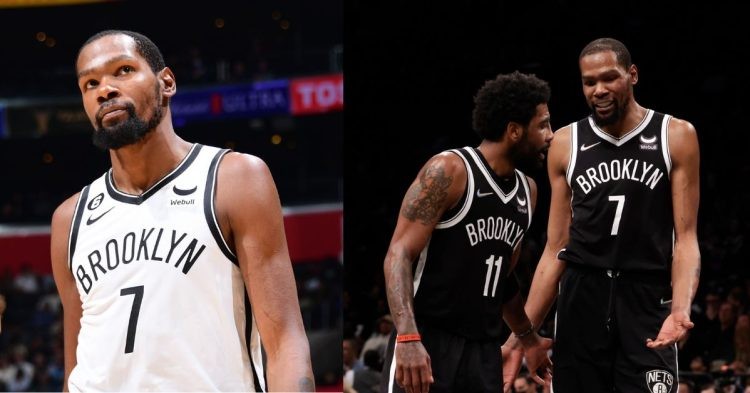 Kevin Durant alone and with Kyrie Irving on the court (Credit: Twitter)

Kevin Durant is one of the most scrutinized and criticized NBA stars. He decided to leave Stephen Curry and the Golden State Warriors in order to create his own legacy. This involved teaming up with Kyrie Irving and deciding to play for the Brooklyn Nets.

He may have decided to do all of this as a free man. However, the majority of the NBA world and media decided to label him a “follower” and not a leader. This is a narrative that has been around and increased greatly over the years.

The 2x NBA champion recently addressed all of this and defended himself. One should wonder what he said and try to understand the situation from his perspective.

It seems that the rumors got so bad that even Durant ended up making a request to be traded and leave the Brooklyn Nets. Of course, there were other important reasons for his decision as well.

In the end, KD decided to stay and ride it out with the Nets. However, that does not mean he didn’t address all of this in the interview with “Bleacherreport“. He also challenged the validity of the attacks against his leadership and called them out.

“I’m not a leader? What the fu*k does that mean?… A lot of people say I’m not a leader because I didn’t tell Kyrie to get vaccinated. Come on. Or I didn’t condemn Kyrie for leaving the team, going out, and living his life. I’m not about to tell a grown-ass man what he can and can’t do with his own life and dissect his views or how he thinks about sh*t.”

Durant went on to clarify that this did not mean he neglected his duties as a “leader”. Instead, he simply did not care to share the way he operated with the world.

“We can have a conversation and exchange perspectives on how I feel about the topic and you feel about the topic, but everybody else don’t need to know or hear about our conversations because we’re grown-ass men. I don’t operate like that. I don’t need to show or tell everybody what I’m doing with my teammates so y’all can pump me up and say, Yeah, KD, you’re the boss, you’re the leader.”

The Brooklyn Nets star makes a valid point. He does not need to publicly reprimand his teammates to garner the world’s approval as a leader. We hope his message is made clear and that people understand how KD operates.