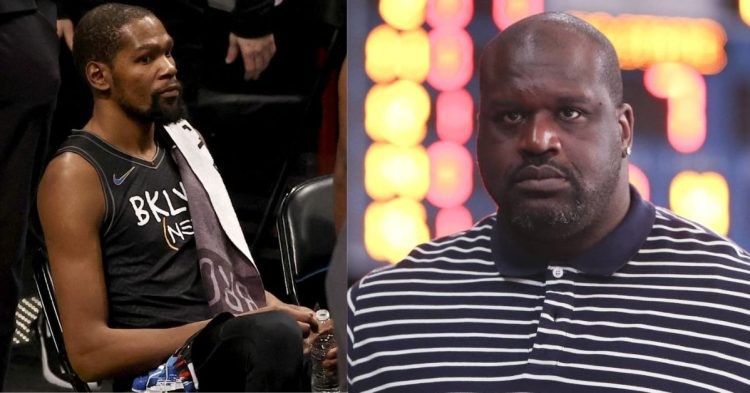 Kevin Durant is coming off quite a disappointing season with the Brooklyn Nets. They were eliminated in the first round of the Eastern Conference playoffs by Jayson Tatum and the Boston Celtics. This has led several NBA analysts including Shaquille O’Neal to pick apart KD for his attitude and performance.

We all know that Durant isn’t the kind of person to take jabs and not respond. He finally had enough of Shaq and took a few personal shots of his own in turn. One must wonder about the context of this beef and how Durant reacted to O’Neal’s taunts.

This argument began when Shaq made a claim that KD is a great player, but doesn’t deserve to be a part of the championship club. Instead, he belongs outside “in the line” with players like John Stockton, Karl Malone, and Charles Barkley. To those who do not know, these are players who never managed to carry their teams to the promised land and deliver an NBA title.

Durant had a huge problem with this. He finally responded to these taunts.

“He said I can’t talk to him because I haven’t won a championship. I can see right through that, Shaq feels validated in life, not just basketball because he’s won a championship… That shows me your whole life is centered around the fact that you feel like you’re someone in this world because you won a championship. For me, it ain’t even about that.”

We all know Durant went on to join the Warriors and win back-to-back titles. However, this did not spare him from further criticism as he was then accused of being a “bus rider” and as someone looking for an easy way to succeed. As we all know, this led to him leaving and joining the Brooklyn Nets. He is yet to help the franchise win a title in his 3 years there.

One should wonder if Shaq is resting on his championship accolades a bit too much when criticizing modern players. After all, O’Neal was part of a dynasty alongside Kobe Bryant and won 3 titles. He went on to win one more with the Miami Heat after parting ways with the Los Angeles Lakers.

This is something KD is yet to do in his current situation with the Brooklyn Nets.
Tags: Kevin DurantNBAShaquille O'Neal
Previous Post