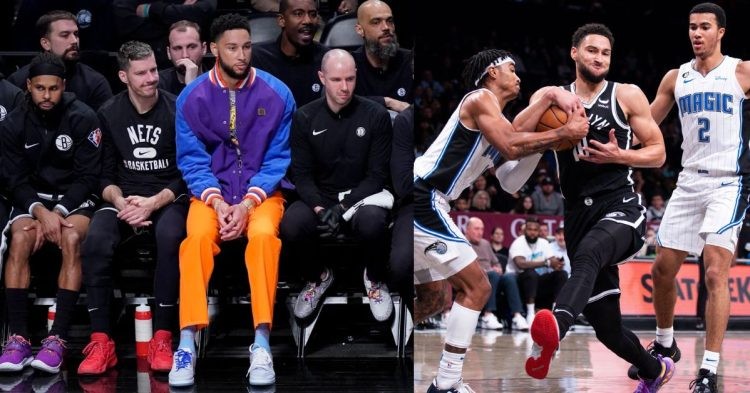 Brooklyn Nets star Ben Simmons on the court and the sidelines (Credit: Twitter)

The Brooklyn Nets’ latest addition Ben Simmons has not lived up to expectations so far. NBA fans will remember that he was brought to the Nets in order to make them a contender. After all, his defensive abilities and playmaking skills were rated highly.

Unfortunately, it looks like Simmons has a long way to go before returning to being the player he once was. If that is even possible. Now, he is listed out of the Brooklyn Nets’ starting lineup.

This must be frustrating for the average fan. It is important to know and understand what is currently happening to Ben Simmons and how this will affect his team if it continues.

According to the injury reports, Simmons injured his left lateral upper calf on November 28th. We remember that the Nets played Paolo Banchero and the Orlando Magic that day. They ended up winning the game. However, Simmons came out of the game during the second quarter.

The new Nets head coach Jacque Vaughn was asked what happened with Ben and how he was feeling, “He had some left knee soreness, that same knee. Asked to be pulled out of the game. We’ll check him day by day, see how he responds with a little treatment, see what it looks like.”

Further reports also indicated that Simmons would miss at least three games for the Brooklyn Nets. Since his injury, they have won both their games against the Washington Wizards and Toronto Raptors. Kyrie Irving and Kevin Durant have successfully kept the team going and they now have a record of 13 wins and 11 losses. Brooklyn will be playing the Boston Celtics tonight. This is the same team that swept them in the first round of the playoffs last year. Ben Simmons did not play in that series as well due to injuries. Moreover, this is a bad time to be shorthanded against the Celtics.

Jayson Tatum appears to be on a revenge season and is carrying the team to hold the best record in the entire NBA, with 18 wins and 5 losses. Therefore, Brooklyn will need a healthy Ben Simmons in order to win the game.

If he does not play in this game, he is expected to suit up against the Charlotte Hornets. However, at the moment, there is no clear date for his return.