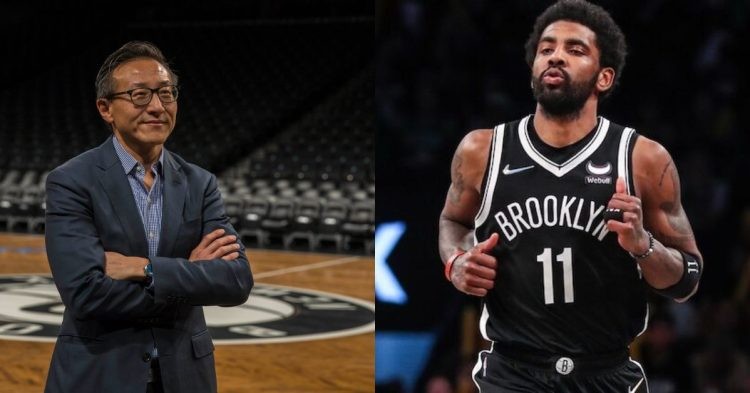 Kyrie Irving and Joe Tsai on the court (Credit: Twitter)

Many NBA fans are already aware that Brooklyn Nets star Kyrie Irving is currently suspended. His actions have earned a large amount of criticism from the Nets organization and league and they decided to suspend him for “no less than 5 games”.

Well, we are 7 games into the Nets season since then and Kyrie has not played for the team yet. People might be wondering when we can expect Irving back on the court at the earliest. Initially, Brooklyn claimed that there was no fixed timetable for his return. However, we have a big update on his potential return.

What caused the delay in Kyrie Irving’s return despite serving the 5-game suspension?

As already mentioned, Irving has been absent from the roster and did not travel with the team on their current road trip. He missed games against the Mavs, Lakers, Clippers, and many other teams. Thankfully, for Kyrie fans, he is likely to return after the Nets complete their road trip.

Woj gives update on the Kyrie Irving situation.. Says that he thinks Kyrie will be back with the Nets and that it should be in the relatively near future as the Nets head back East after their game v Portland. pic.twitter.com/1jA9BtRX4j

He could have finished the suspension and returned to his team sooner if he truly tried. However, the several conditions laid down by the Brooklyn Nets would have been quite difficult to follow through with. Additionally, we only know that he met with Joe Tsai to discuss his true nature and the situation caused.

Other conditions like sensitivity training and anti-Semitic training clearly occur behind closed doors. There was also a condition involving meeting “Jewish leaders”. It is definitely unclear whether Irving has obliged to do so or if it is indeed mandatory. We don’t even know who these leaders are and how their opinions of Irving could influence his suspension. All of these factors could be some of the reasons why he is yet to return to his team on the road.

There is only one game left for the Brooklyn Nets before they head back home and that is against the Portland Trail Blazers. Damian Lillard has gotten off to an exceptional start and his team currently holds a record of 10 wins and 4 losses. This makes them the best team in the Western Conference.

Things don’t get easier for the Nets from there. When they return home, they will face Ja Morant and the Memphis Grizzlies in a rematch. We know Memphis won last time. It is likely for the same thing to occur again if Kyrie Irving does not play. Therefore, we hope the reports are true and he actually suits up for this match.