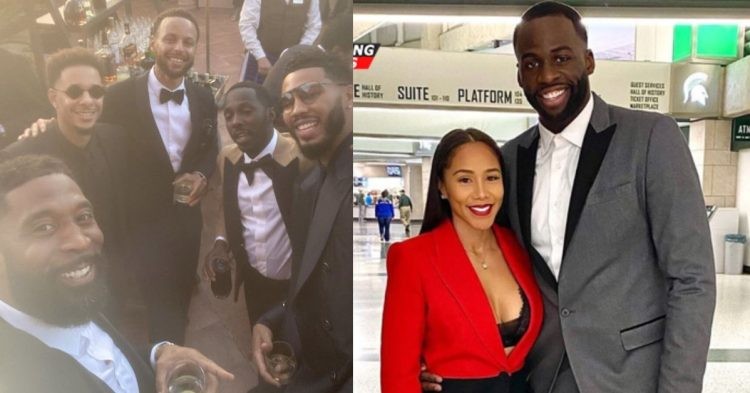 It has been a good offseason for Draymond Green to complement a solid performance in the Golden State Warrior’s run to their 4th NBA title in this era. He just got married to a woman called Hazel Renee. Not many people are aware of NBA players’ social and dating lives. Thus, this news came as a pleasant surprise.

His teammates such as Stephen Curry and rivals like Jayson Tatum were all seen having a good time together. There were several kinds of beef and trash talk during the NBA Finals. It is good to see that everything that happens on the court stays on it.

In this day and age, social media and the paparazzi always try to look for something controversial when players meet. Life is not all about drama and high-risk situations. Marriage is certainly a risk at some level. However, since Draymond already has two children and is a father, he should be better equipped than most when it comes to being a husband.

Certainly, there are several other members of the Warriors who are married and have families. Up to this point, Curry was the only one in the veteran trio of Steph Klay, and Draymond to have a wife and children. It would interest many people from orthodox cultures to understand that NBA players may have children but need not be married.

Jayson Tatum was present on this occasion. He fits the above description and has a son, Deuce Tatum. Several of the wedding photos are yet to be released. Thus, all we have for now are what pictures were shared by the NBA players present there.

There were several reactions by the fans on social media. Some were stunned and assumed Green had already been married. This is because Hazel and Draymond have been in each other’s lives going all the way back to high school. Both of them went their own ways as their careers took them in different directions. That was in 2012.

They reconnected a few years later and got engaged at some point in 2019. Both of them wished to keep much of their romantic life private. After all, she is an actress and TV personality. For those interested, Renee acted in a reality show called “Basketball Wives” and was a recurring star on a show called “Empire“.

We all know about the pressures of being married and meeting expectations. Hopefully, they have a good life together and celebrate life with everyone they are associated with.