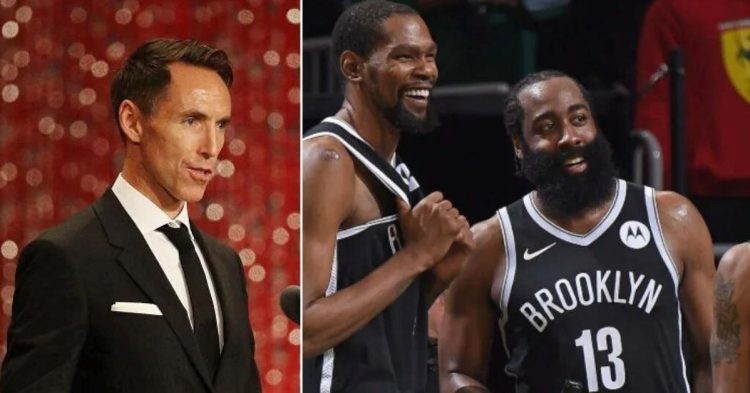 After months of endless speculation, the Brooklyn Nets have finally appointed the 2-time MVP Steve Nash as their Head Coach. Brooklyn Nets had a tumultuous ride this season with multiple coaches and experiments with their star players sidelined. Coach Kenny Atkinson was fired in March and Jacque Vaughn was appointed in his place. Meanwhile, they were actively scouting for suitable candidates for the 2020-21 NBA season, and reportedly Gregg Popovich was their preference. To everyone’s surprise, Brooklyn Nets went ahead with Steve Nash who has no prior experience in coaching.

Hall of Fame guard Steve Nash has signed a four-year contract to become the next coach of the Brooklyn Nets, sources tell ESPN.

However, Steve Nash has an impressive resume to back this decision made by the Nets’ front office. He played 18 seasons in the NBA with Phoenix Suns, Dallas Mavericks, and Los Angeles Lakers. Nash was named All-Star eight times in his career and won back-to-back MVPs in addition to being part of the 50/40/90 club, becoming one the only few players to ever do it. Steve Nash was honored for his brilliant career in 2018 when he was enshrined in the Naismith Memorial Basketball Hall of Fame.

This five-time assist champion is exactly what Kyrie Irving needs to facilitate plays for a scoring giant like Kevin Durant. Nash is #3 in all-time assist leaderboard and was known for the 7-second offense with the Phoenix suns. He will most likely run this offense through Kevin Durant and Kyrie Irving to make Brooklyn Nets one of the top contenders for the title in 2021.

Steve Nash has signed a four-year contract as the Head coach. Brooklyn Nets believe he will be a great mentor for Kevin Durant and especially point guard Kyrie Irving. Even though he has little to no experience, Nash has mentored several young players playing in the NBA right now. Trey Young often reminds us of Steve Nash in several ways and he is one of the players mentored by him.

“After meeting with a number of highly accomplished coaching candidates from diverse backgrounds, we knew we had a difficult decision to make, In Steve we see a leader, communicator, and mentor who will garner the respect of our players.  I have had the privilege to know Steve for many years. One of the great on-court leaders in our game, I have witnessed firsthand his basketball acumen and selfless approach to prioritize team success. His instincts for the game, combined with an inherent ability to communicate with and unite players towards a common goal, will prepare us to compete at the highest levels of the league. We are excited to welcome Steve, Lilla, Lola, Bella, Matteo, Luca, and Ruby to Brooklyn.”

Brooklyn Nets and General Manager Sean Marks are thrilled to add Steve Nash to their family. Nash and Mark go way back when they were both players in the NBA. Sean Mark was signed by the Pheonix suns in 2006 for a one year contract, however, he emerged as a better executive than a player.

“I am honored to have this opportunity with such a first-class organization and would like to thank Sean for having faith in my ability to lead this team forward. Coaching is something I knew I wanted to pursue when the time was right, and I am humbled to be able to work with the outstanding group of players and staff we have here in Brooklyn.”