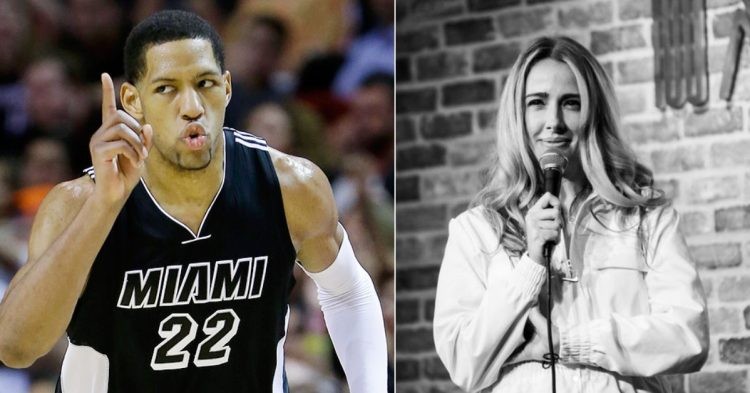 NBA player who is a Jehovah's Witness (Credit: NBA)

Brittany Schmitt came out guns blazing during her set at The Backyard Series. It was Don’t Tell Comedy’s 8th independent YouTube series that features short stand-up comedy sets. This series features the next generation of best stand-up comedians!

While making jokes about her personal life, Brittany joked about an NBA player she dated who later turned into a Jehovah’s Witness. The joke partially sent waves regarding who this NBA player might be and fans couldn’t keep calm but look for Jehovah’s Witnesses in the NBA.

How many NBA players are Jehovah’s Witnesses?

Without revealing who the player might be, the 32-year comedian’s joke did bits for the NBA fans ( to say the least). But it may seem like it was in fact Danny Granger, considering the fact that they were allegedly in a relationship as well. The comment, “it as the light-skinned one” points to him.

Fans do think the same too. But it can also be another player that Schmitt canceled to go on a date with her now-husband. Maybe all of this is nothing but a joke.

Dewayne Dedmon is the only active NBA player who is a Jehovah’s Witness. His parents are also of the same faith and did raise their son to follow in their footsteps when it came to religion. He currently plays for the Miami Heat as a center and wears the number 21 jersey for the franchise.

Darren Collison was in the NBA from 2009-2019. He was drafted by the New Orleans Hornets in the 2009 NBA draft. Collison also played for the Indiana Pacers, Dallas Mavericks, Los Angeles Clippers, Sacramento Kings, and Los Angeles Lakers. Darren retired from NBA to become a Jehovah’s Witness and thus hung up the boots.

Imagine retiring from the NBA to become a Jehovah's witness

Comedian Brittany Schmitt sure did throw a bomb with her joke and got fans and people thinking and searching. So much so that the joke about her personal life did influence Danny Granger’s rise to clout.

Twitter went on a frenzy and flooded it with #Jehovahswitness. Brittany went so far as to start a rumor fest based on her personal life and searches still pop up regarding the same!