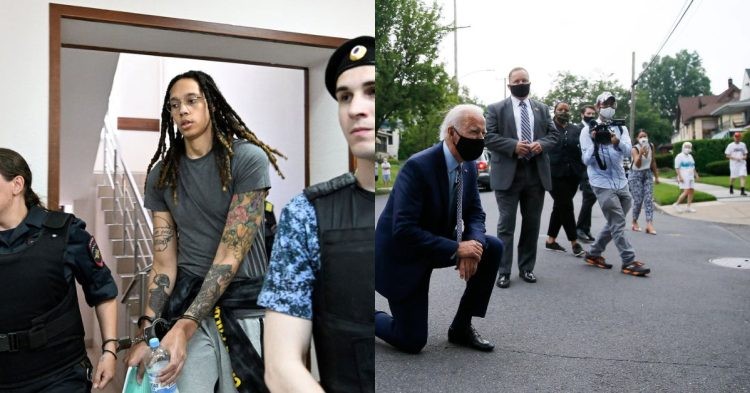 After the WNBA sensation, Brittney Griner’s recent release in a prisoner swap between the US and Russia, social media is currently trending with an old comment made by her about the US National Anthem.

Many celebrities and politicians celebrated and welcomed this historic negotiation by the Biden administration, except a few.

Thank you to President Biden and everyone in the administration who made this happen, as well as the advocates who pushed for it. https://t.co/xwAIyArOoK

In 2020, according to Arizona Central, the Phoenix Mercury star stood against the National Anthem being played before the WNBA games. Brittney played for the US in the 2020 Olympics and is a star performer.

The 30-year-old WNBA star’s remarks on the US national anthem in 2020 stirred up controversy. The WNBA sensation justified her comments on the National Anthem by arguing that they were not inclusive when they were deemed in 1931.

After months of wrongful detention in Russia, Brittney Griner is on her way home to her wife Cherelle and her other loved ones. We will not cease in our efforts until Paul Whelan is back with his family, too.

Guess which one Biden traded a terrorist to free?

Now, BG was released from Russia by swapping her for Viktor Bout, an arms dealer arrested almost a decade ago by the US. This has again stirred up her old comments about the National Anthem. Many citizens argued that President Joe Biden should have brought back ex-US Marine Paul Whelan from Russia instead or alongside Brittney Griner.

What did Brittney Griner say about the National Anthem?

President Biden’s recent steps seeking Griner’s release have outraged many citizens who believe Whelan to be a true patriot against someone like Griner who many argue “hates America”. Paul was arrested over suspicions of spying.

The Phoenix Mercury star expressed that sports was not the right place to play the national anthem unless you are representing your country.

Brittney Griner better stand at attention with her hand over her heart every time she hears that anthem now.

If she kneels ever again, she should be sent right back to Russia.

“I don’t mean that in any disrespect to our country. My dad was in Vietnam and a law officer for 30 years. I wanted to be a cop before basketball. I do have pride for my country.”, Brittney Griner added.

Needless to say, her comments from the past have come to haunt her amid her release from Russia over a crime that is illegal in the said country. Whether or not the United States should have gone ahead and made the trade continues to be up for public debate.