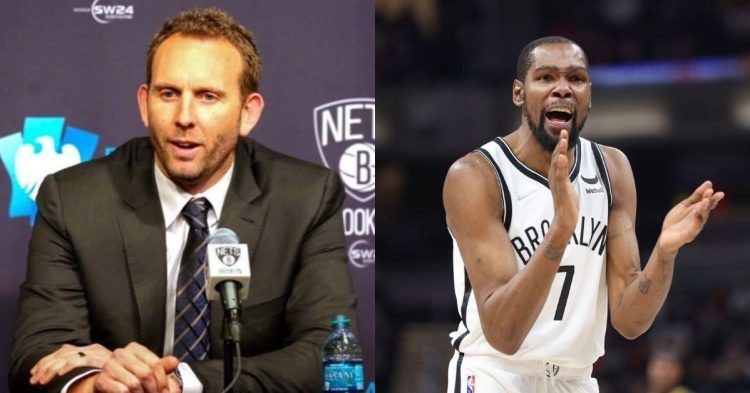 This NBA offseason has been full of speculations regarding Kevin Durant’s potential destination. The Brooklyn Nets star demanded a trade and then attempted to leverage him to stay with the management being fired. The Boston Celtics and several other teams had engaged in trade talks for the 2x NBA champion. ESPN recently shared a post on Instagram indicating that Durant will remain a Net this season.

Sometimes all of the noise is much to do about nothing. This whole situation of asking for a trade, then asking for a change in franchise structure, and then being appeased is quite puzzling. The Nets General Manager released a statement that sheds more light on the situation.

Not even the media can know everything. Who would have guessed that Durant would have met with Steve Nash, Sean Marks, Joe Tsai, and his wife Clara Wu Tsai? This speaks to the power in the hands of an NBA superstar in current times.

Sean Marks released a statement soon after revealing the essence of how the meeting ended. Whatever problems Durant must have had with the Nets staff were likely thoroughly discussed and resolved behind closed doors.

“Steve Nash and I, together with Joe Tsai and Clara Wu Tsai, met with Kevin Durant and Rich Kleiman in Los Angeles yesterday. We have agreed to move forward with our partnership. We are focusing on basketball, with one collective goal in mind: building a lasting franchise to bring a championship to Brooklyn“.

These are certainly very strong and motivating words from Marks considering the situation the Nets have dealt with so far. They decided to make the move for James Harden. However, we simply do not know if Kevin Durant wanted that or would have been able to stop it. The Beard came and left to be replaced with Ben Simmons.

Simmons has not suited up for the Nets this season. He watched from the sidelines as they were swept by the Boston Celtics in the first round of the eastern conference playoffs. Certainly, Sean Marks and Steve Nash and to be blamed more than Durant on this issue.

One can only imagine what the Nets could have done if they never made the Harden trade. That could be a major reason KD initially wanted the management gone. Another could be how they handled the Kyrie Irving vaccine situation.

Nonetheless, they seem to have resolved it. We are looking forward to seeing Kevin Durant and Kyrie Irving in action next season.