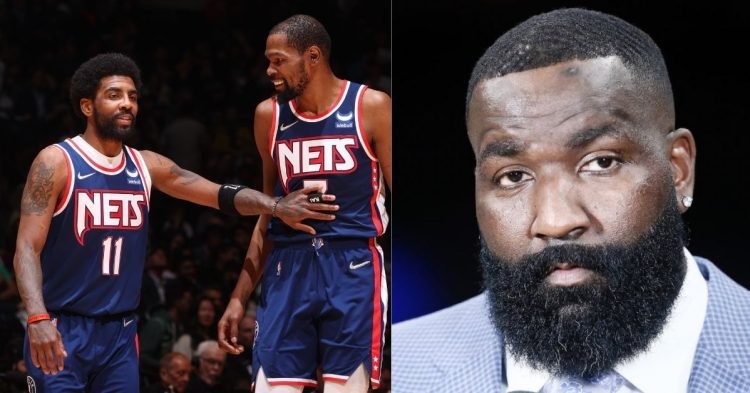 Kevin Durant’s scenario with the Brooklyn Nets has not come to an end just yet. He had submitted a trade request more than a week ago and there have not been many developments in his situation. Many teams were reported to be interested in the Brooklyn Nets star but none of the reports were concrete.

KD’s request has been somewhat strange itself. Everyone knows the friendship between him and Kyrie Irving. Kyrie recently committed to staying with the Nets. He was looking for a team that was willing to sign him for a long time. Eventually, he chose to opt-in for his final year with Brooklyn.
It seems like Kendrick Perkins has had enough. The former basketball player had a very different take compared to others. He said on ESPN’s NBA Today, “I don’t believe Kevin Durant. I don’t believe it at all. Matter of fact, it makes zero sense to me that he wants to be traded at this point. I don’t believe he believes it.”

We all can agree with Perkins on this. The timing of KD’s request has been something surprising. Why would he want to leave the Brooklyn Nets? Especially after his friend decided he was going to stay. Durant has done this before with the Golden State Warriors.

He decided it was time for a new switch after reportedly falling out with some of his teammates. However, it was just one year after winning the 2018 NBA Championship.

Some can argue that KD wants to leave because the Nets don’t have a super team. The Warriors’ situation is a prime example of that not being the reason behind his request. In addition to that, the Nets also have Ben Simmons. Although he has had his fair share of drama, there is no doubt that he is one of the most talented players on the Brooklyn Nets roster.
Perkins did not stop there. He also mentioned, “I think Kevin Durant is doing this as a scare tactic in order to help Kyrie Irving have leverage to get him sign long term with the Brooklyn Nets”. If this is true, it could be huge.
Considering Kyrie’s age, it is understandable that teams aren’t lining up to acquire him anymore. What Perkins said quite makes sense. The most sensible thing for Kyrie to do is somehow land a costly contract with the Nets. However, does that mean Kevin Durant is willing to go to great lengths to help Kyrie? To be honest, only KD would know the real reason why he chose to request a trade, and why it has been taking so long.
Tags: Brooklyn NetsKevin DurantKyrie Irving
Previous Post