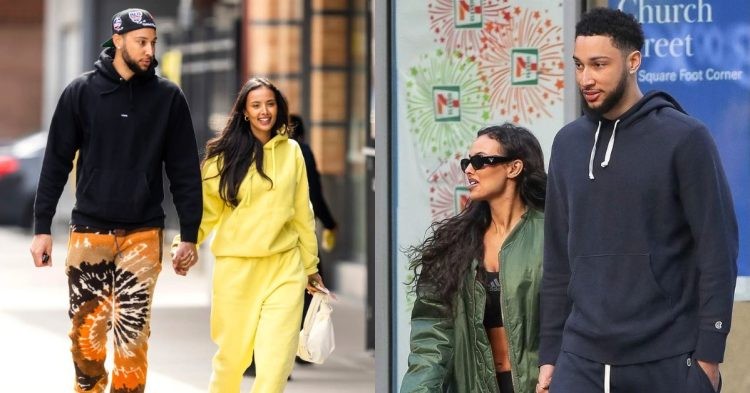 Ben Simmons is an NBA player who is currently with the Brooklyn Nets. He joined them after a long saga with the Philadelphia 76ers where rumors said Simmons did not want to play for the franchise anymore. He came to Brooklyn in early 2022. The trade involved superstar James Harden going the other way, together with Seth Curry, Andre Drummond, and a draft pick.

Since he joined the Nets, the Australian hasn’t featured for them in a game yet. He has still managed to hop on the latest headlines today. Reports have emerged claiming that Ben has split with his fiancée, Maya Jama. The couple’s engagement happened eight months ago and was kept away from the public eye.

Maya is a UK-based TV and radio presenter. One of her more notable projects would be the BBC Three competition, Glow Up: Britain’s Next Make-Up Star. Maya and Ben kept their relationship under wraps for a long period. It is still unknown when the pair started dating or when the NBA star put a ring on Maya’s finger. However, they made their relationship public in 2021 when they attended Wimbledon 2021 together.

Ben Simmons and Maya Jama have ended their engagement, per @nypost pic.twitter.com/xKlCiD7yLW

After the split, a source close to the couple revealed more information to New York Post about their sudden split. They said, “After many long nights and hours of heartfelt talks, they finally realized as much as they love each other, their nonstop careers and endless travel have made it incredibly impossible to make it work.”

Why did Ben Simmons split with Maya Jama?

“They had no idea the challenges they would face when handling all the logistics of making a life together in two countries”, the anonymous source also added. It seems like the main reason for the couple’s split was the fact that they were having their lives in two different countries. Simmons and Jama would not have been able to make time for each other and juggle their profession at the same time on their own.

The break-up rumors may not have been coming out of nowhere. Last month, there were many reports to report that the couple broke up. Maya was quick to shut them down with a tweet, “Stop believing “sources” in papers plz”. She later deleted the tweet. During the same time frame, Simmons also tweeted “slow news day”. However, that may have been targeted at other false new reports that suggested a rift between Simmons and his Nets teammates.

Simmons will now be preparing to return to the NBA in the 2022-23 season after a long absence. And on the other hand, it seems like Maya will also focus on her career, just like Ben.