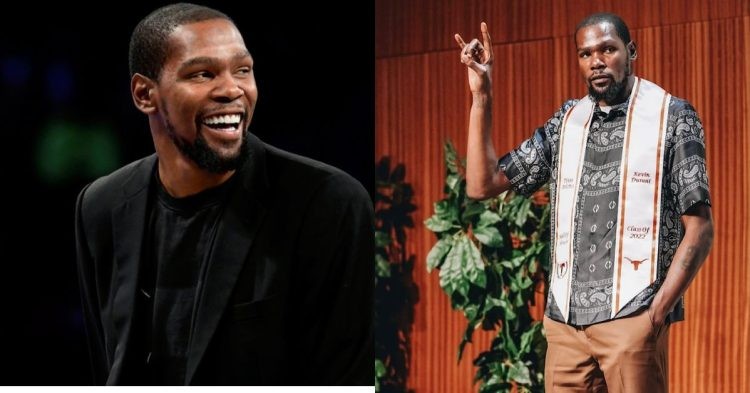 Kevin Durant is a 2x NBA champion and leader of the Brooklyn Nets. He is coming off a disappointing season where his team was eliminated by Jayson Tatum and the Boston Celtics in the first round of the NBA playoffs. Moreover, they were swept and lost the series 4-0.

Hence, as expected KD was disappointed with his team, and trade rumors entertained us this offseason. Now, Durant made the news for something much more positive. He has been inducted into his college’s hall of honor. Some of us who are familiar with KD’s story know he played only one year in college. But, is fiercely loyal to the University of Texas.

Wanda Durant showed up on this special day for Kevin Durant

Durant is unmarried. One of the closest women in his life is his mother Wanda. It would surprise many people to know KD came from a poor background and endured much hardship. His family’s financial situation improved drastically after he became an NBA superstar. However, he was still an ordinary athlete during his time in college.

They say that once a person becomes popular or famous, it is difficult to distinguish who their true friends are. As a result, many people including Durant are attached to the bonds they had before they “made it”.

This was truly a proper induction. The Nets star was even given an honorary sachet for the occasion. Additionally, he also signed his shoes and had them retired. Moreover, his team USA basketball jersey was also retired. We are sure Kevin was very happy to see that his mother had shown up on this special day for him. He revealed to the world how much she mattered to him during his 2014 NBA Finals MVP speech.

Durant was also surrounded by some of his closest friends and loved ones. Therefore, this was an occasion to see him in the best mood for a long time. Since he was in his hometown area, there was very little intrusion from the media and he was free to be himself.

We know KD will want to make his college proud yet again and will try to bring an NBA title to the Brooklyn Nets this upcoming season.