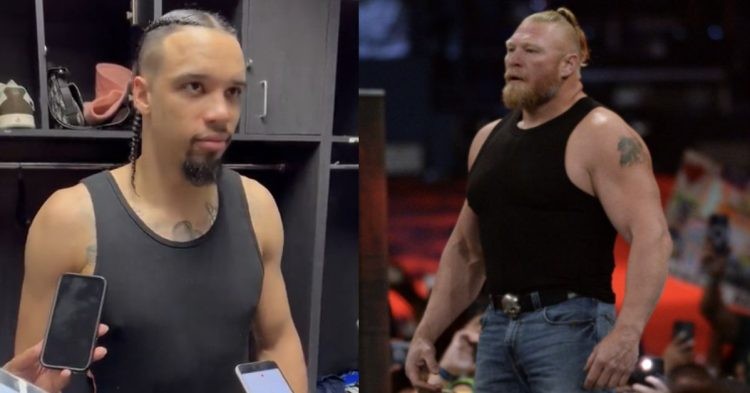 Dillon Brooks being interviewed and Brock Lesnar in the ring (Credit: Twitter)

NBA fans found Dillon Brooks‘ outfit quite amusing and drew comparisons to WWE wrestler Brock Lesnar. We all know that NBA players have to wear jerseys when on the court. However, they are somewhat free to dress how they please heading into the game and post-game.

With that being said, the Memphis Grizzlies star’s attire did not go unnoticed and fans soon went on social media to discuss it. One might certainly be interested in knowing what the fans had to say and whether there is much truth to it.

While players are certainly free to wear what they want. Sometimes they take it too far and dress in bizarre attires. Brooks has done just that by wearing a sleeveless black tank top. Additionally, he tucked it into his jeans making himself look quite comical, to say the least.

As a result, fans took the chance to make fun of the Grizzlies star, “Built Like an Ironing Board“, and “He looks like that dude that eats all the spicey food”, are some of the somewhat ruder comments directed at Dillon Brooks. Some even took it a step further and called out the mentality of someone who would wear clothes like that “Bro look like he yells at his wife in public.”

Bro look like he yells at his wife in public.

He looks like that dude that eats all the spicey food

Fans pointed out that Brooks can never live up to the standard that Brock Lesnar set by wearing the same clothes and choose to ridicule him. They also made fun of his physical appearance as he did not look the fittest in the photo that was taken and was much thinner than Lesnar was. Perhaps Brooks should have put a little more thought into deciding what he was going to wear before the picture was taken.

Where is bro chest 🤦🏾‍♂️

At the end of the day, this is all just humourous. It does not change the fact that Dillon is playing excellent basketball for the Grizzlies. He is averaging 16 points for them this season and fulfilling his responsibilities on both ends of the court. As long as he continues to do so and the Grizzlies win, he can continue wearing whatever he feels like wearing.